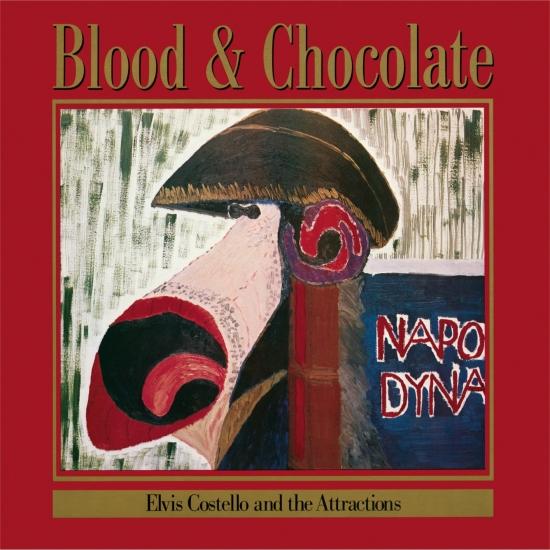 Following 1985's „King Of America“, Elvis Costello temporarily reunited with the Attractions and producer Nick Lowe for one last album before their final split. (Though two albums were released with the Attractions in the 1990s, bassist Bruce Thomas--then on the outs with his bandmates due to a dishy tell-all roman à clef novel he'd written in the interim--had a significantly reduced role in those.) It's quite a farewell: „Blood And Chocolate“ may stand as the hardest rocking and most lyrically vituperative album in Costello's oeuvre, even more so than early scorchers like „This Year‘s Model“. Even the ballads, like the stark, ominous 'I Want You' and the dizzying 'Poor Napoleon,' fairly seethe with venomous malice, and rockers like the throbbing opener 'Uncomplicated' and the simply brutal kiss-off 'I Hope You're Happy Now' are Costello at his most savage.
„Elvis Costello returned to the Attractions as quickly as he abandoned them, hiring the band and old producer Nick Lowe to record Blood & Chocolate, his second record in the span of one year. Where King of America was a stripped-down roots rock affair, Blood & Chocolate is a return to the harder rock of This Year's Model. Occasionally, there are hints of country and folk, but the majority of the album is straight-ahead rock & roll: the opener, 'Uncomplicated,' only has two chords. The main difference between the reunion and the Attractions' earlier work is the tone -- This Year's Model was tense and out of control, whereas Blood & Chocolate is controlled viciousness. 'Tokyo Storm Warning,' 'I Hope You're Happy Now,' and 'I Want You' are the nastiest songs he has ever recorded, both lyrically and musically -- Costello snarls the lyrics and the Attractions bash out the chords. Blood & Chocolate doesn't retain that high level of energy throughout the record, however, and loses momentum toward the end of the album. Still, it's a lively and frequently compelling reunion, even if it is a rather mean-spirited one.“ (Stephen Thomas Erlewine, AMG)
Elvis Costello, guitars, vocals, harmonium, bass, electric organ, percussion
Steve Nieve, piano, organ, harmonium
Bruce Thomas, bass, electric guitar, saxophone
Pete Thomas, drums, alto saxophone
Additional musicians:
Nick Lowe, acoustic guitar
Cait O'Riordan, vocals on 'Crimes of Paris' and 'Poor Napoleon'
Jimmy Cliff, vocals on 'Seven Day Weekend'
Mitchell Froom, organ on 'Blue Chair' single version
Tom 'T-Bone' Wolk, electric guitar, bass on 'Blue Chair' single version
Mickey Curry, drums on 'Blue Chair' single version
Recorded March–May 1986 at Olympic Studios, London, England
Produced by Nick Lowe and Colin Fairley
Digitally remastered