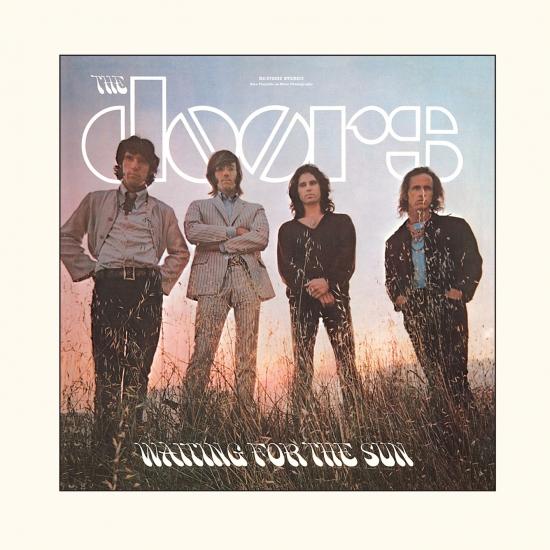 Waiting for the Sun was originally released in August, 1968. It was the band’s third platinum album in less than two years, and the first to top the album chart. Since its debut, the album has sold millions of copies around the globe and contributed to the Doors’ legendary canon with classics like “The Unknown Soldier,” “Five To One” and the #1 smash, “Hello, I Love You.”
We celebrate the 50th anniversary of this monumental album this year with WAITING FOR THE SUN: 50th ANNIVERSARY DELUXE EDITION. This double-album collection features a new version of the album’s original stereo mix, which has been newly remastered from the original master tapes by Bruce Botnick, the Doors’ longtime engineer/mixer. The album also includes 14 completely unreleased tracks: nine recently discovered “rough mixes” from the album recording sessions and five live songs from a 1968 Copenhagen show.
“Hello, I Love You” became the band’s second #1 hit when it topped the Billboard singles chart for two weeks beginning on August 3, 1968. Now, exactly 50 years later, Rhino will release a new 7” version of the single with its b-side “Love Street.” For this anniversary release, Rhino will use mono radio mixes of the songs that were given exclusively to radio stations for airplay in 1968. This version of “Hello, I Love You” was first available last year as part of The Singles CD collection and is making its vinyl debut here, while the “Love Street” mix is being released commercially for the first time. The 7” single will be available on August 3 for $9.98.
Botnick’s newly remastered stereo mix of Waiting For The Sun adds new sonic dimensions to songs like “The Unknown Soldier” and “Spanish Caravan,” but that wasn’t his only contribution to the project. While going through his archive, he uncovered a cache of rough mixes from the sessions that hadn’t been played in 50 years. Botnick says: “I prefer some of these rough mixes to the finals, as they represent all of the elements and additional background vocals, different sensibilities on balances, and some intangible roughness, all of which are quite attractive and refreshing.”
The deluxe edition of the album also features unreleased live recordings of five songs from the Doors’ September 17, 1968 concert in Copenhagen. The performance includes three songs from the band’s latest album – “Hello, I Love You,” “Five To One,” and “The Unknown Soldier” – plus the classics “Back Door Man” and “The WASP (Texas Radio And The Big Beat).”
When the Doors recorded Waiting For The Sun in 1968, they were among the first bands to use Dolby A301 noise reduction processors, which was cutting-edge recording tech at the time. Similarly, the most advanced sound recording innovations were used to make the anniversary edition of Waiting For The Sun. The new release has been encoded with the MQA (Master Quality Authenticated) process. An MQA disc plays back on all CD players as standard CD quality. But if a conventional CD player is connected to an MQA-enabled device, it can play the same disc back at its original sample rate.
The Doors
Digitally remastered