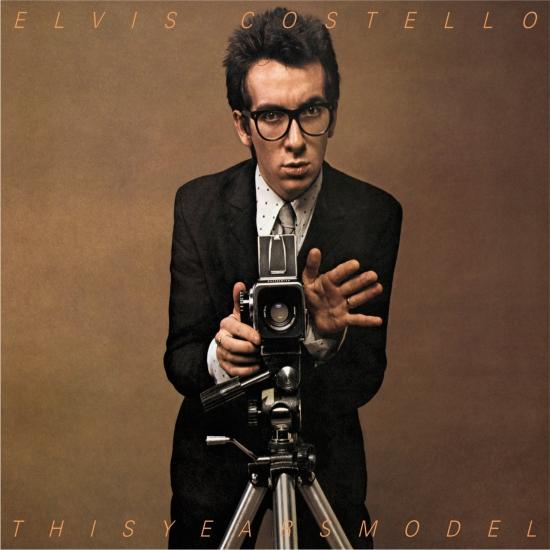 For his second album, Elvis Costello fine-tuned his aesthetic by abandoning the California studio cat accompanists of his debut for the more aggressive, quirky and very British Attractions, who would define EC's sound over the next several years. Where „My Aim IS True“ highlighted Costello's rootsy influences (the Band, etc.), „This Year's Model“ wholeheartedly embraces the 'new wave' out-with-the-old mindset, favoring tightly wound ferocity over back-porch-isms.
Irresistibly catchy, in a twitchy, neurotic, white-knuckled way, „This Year's Model“ is Costello at his edgiest. The classic 'Pump It Up' pummels the listener with garage-band organ, pounding drums, and Highway 61 Revisited-style ranting. 'Radio, Radio' turned into something of an anti-authoritarian anthem for Costello. The snaky guitar and reggae-tinged drums of 'I Don't Want to Go to Chelsea' complement his verge-of-a-nervous-breakdown vocal performance nicely. Come to think of it, so does nearly everything else here.
„Where My Aim Is True implied punk rock with its lyrics and stripped-down production, This Year's Model sounds like punk. Not that Elvis Costello's songwriting has changed -- This Year's Model is comprised largely of leftovers from My Aim Is True and songs written on the road. It's the music that changed. After releasing My Aim Is True, Costello assembled a backing band called the Attractions, which were considerably tougher and wilder than Clover, who played on his debut. the Attractions were a rock & roll band, which gives This Year's Model a reckless, careening feel. It's nervous, amphetamine-fueled, nearly paranoid music -- the group sounds like they're spinning out of control as soon as they crash in on the brief opener, 'No Action,' and they never get completely back on track, even on the slower numbers. Costello and the Attractions speed through This Year's Model at a blinding pace, which gives his songs -- which were already meaner than the set on My Aim Is True -- a nastier edge. 'Lipstick Vogue,' 'Pump It Up,' and '(I Don't Want to Go To) Chelsea' are all underscored with sexual menace, while 'Night Rally' touches on a bizarre fascination with fascism that would blossom on his next album, Armed Forces. Even the songs that sound relatively lighthearted -- 'Hand in Hand,' 'Little Triggers,' 'Lip Service,' 'Living in Paradise' -- are all edgy, thanks to Costello's breathless vocals, Steve Nieve's carnival-esque organ riffs, and Nick Lowe's bare-bones production. Of course, the songs on This Year's Model are typically catchy and help the vicious sentiments sink into your skin, but the most remarkable thing about the album is the sound -- Costello and the Attractions never rocked this hard, or this vengefully, ever again.“ (Stephen Thomas Erlewine, AMG)
5 stars out of 5- '...Loosed punk's bilious hyperactivity upon the soul-based virtuosity of pub rock....uncoiling with an intensity Costello rarely equaled afterward...' (Rolling Stone)
Ranked #98 in Rolling Stone's '500 Greatest Albums Of All Time' - '...The most 'punk' of Costello's records....Costello vs. the world. And Costello wins...' (Rolling Stone)
Elvis Costello, guitar, vocals
Steve Nieve, piano, organ
Bruce Thomas, bass
Pete Thomas, drums
Mick Jones, lead guitar (on 'Big Tears“)
Recorded 1977–1978 at Eden Studios, London, England
Engineered by Roger Bechirian, Roger Bechirian
Produced by Nick Lowe
Digitally remastered