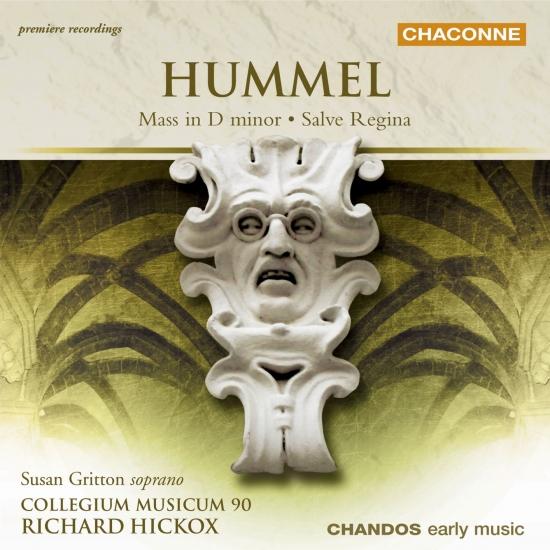 The third eagerly awaited volume of the masses by Johann Nepomuk Hummel. The first volume featuring the celebrated period performance ensemble Collegium Musicum 90 under the inspired direction of Richard Hickox scooped »best choral recording« at the Gramophone Awards.
"…the Salve Regina… is an amiable continuation of the Viennese Classical tradition… Susan Gritton sings it with gusto, while she and the other soloists form a well-blended quartet in the Mass, whose performance under Hickox is confident and shapely, as well as delivered in warm, lucid sound." (BBC Music Magazine)
"The D minor Mass of 1805 was the second of five that Hummel wrote for Prince Esterházy, carrying on from Haydn's late masterpieces. D minor was the key chosen by Haydn for his Nelson Mass seven years earlier but Hummel's opening could hardly be more different. If its persistent syncopations on repeated notes at the start suggest a curious hesitancy, one can look to Mozart's Piano Concerto No 20 as a direct inspiration; this Kyrie develops from hesitancy into blazing confidence. Throughout, Hummel seems intent on taking the listener by surprise: the Gloria emerges in a positive D major on a bold unison motif using the notes of the common chord but develops quickly into elaborate counterpoint; the Credo starts lyrically, the opposite of a positive affirmation of belief, though that is developed as the movement progresses. Hummel intended to write a thoughtful rather than a sharply dramatic setting, with the soloists generally treated as a corporate team set against the full choir: the tenor solo for 'Et incarnatus est', sung with honeyed tone by Mark Padmore, is a striking exception. The brief Sanctus is positive with military overtones; the Benedictus in triple time starts with the soloists alone; while the Agnus Dei finally returns us to D minor before the triumphant setting of 'Dona nobis pacem'. The Salve regina of 1809, the year Haydn died, may have been written for a memorial event to Hummel's great predecessor, but it is anything but elegiac in its operatic style with elaborate coloratura for the soprano soloist, here glowingly sung by Susan Gritton. Richard Hickox again proves an ideal interpreter, drawing superb playing and singing." (Gramophone)
Susan Gritton, soprano
Rachel Nicholls, soprano
Pamela Helen Stephen, mezzo-soprano
Mark Padmore, tenor
Stephen Varcoe, baritone
Collegium Musicum 90
Richard Hickox, conductor 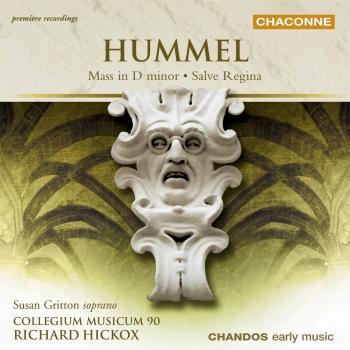