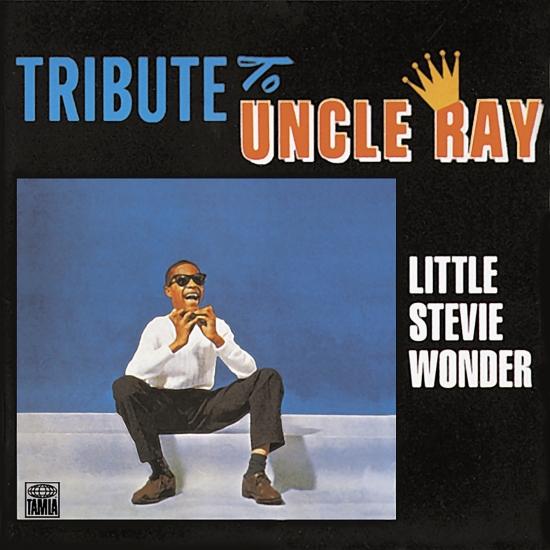 Tribute to Uncle Ray is the second studio album by Stevie Wonder. Released by Motown in October 1962 shortly after The Jazz Soul of Little Stevie, it had been recorded first, when Wonder was just 11 years old. The album was an attempt by Berry Gordy and Motown to associate the young "Little Stevie Wonder" with the successful and popular Ray Charles who was also a blind African American musician. Like his debut, this album failed to generate hit singles as Motown struggled to find a sound to fit Wonder, who was just 12 when this album was released.
The album was a firm reminder of the jazz pedigree of the musicians involved. Most impressive of all were the talents of Stevie Wonder even at this very early stage in his musical development. On this album, he showcases his abilities as a percussionist (drums and bongos), chromatic harmonica player, keyboardist (piano and organ), and composer – and he was prodigious in all four categories. All of these skills are highlighted throughout this record. Perhaps most surprising to contemporary listeners will be the emphasis on instrumentals, which made this a fairly unusual album by Motown standards to begin with. Apart from a few shouts in the background in some of the more free-form tracks, this is Wonder’s only studio album in which he does not sing, yet the sounds are rich and diverse enough that one never misses the vocals.
Stevie Wonder, lead vocals, piano, organ, harmonica, percussion
Digitally remastered

Songs In The Key Of Life (Remastered)

Journey Through The Secret Life Of Plants

Music Of My Mind

The Woman In Red

The Christmas Collection: The Best Of Stevie Wonder

For Once In My Life (Remaster)

I Was Made To Love Her (Remaster)

Stevie Wonder
Dubbed “Little Stevie Wonder” by Motown’s Berry Gordy, he was signed to the label when he was only 12 years old and was just 13 when the live recording “Fingertips (Part 2)” hit no. 1 pop and R&B. Playing harmonica, drums and keyboards, as well as singing, the boy who had been blind from infancy proved aptly named. While still a teenager--dropping the “Little” from his stage name--he earned seven top 10 pop singles, including “For Once In My Life,” “My Cherie Amour,” “Yester-Me, Yester-You, Yesterday,” “Uptight (Everything’s Alright)” and “I Was Made To Love Her.”
By age 20, he was self-sufficient in the studio, writing, playing every instrument and serving as his own producer, including for such hits as “Signed, Sealed, Delivered I’m Yours” and “If You Really Love Me.” He broadened his vision from pure pop to the socially conscious. He began exploring exotic musical ideas incorporating gospel, rock, jazz, reggae, and African and Latin American rhythms, and pioneered the use of synthesizers.
Turning 21 in 1971, Stevie holed up in a New York studio and refused to sign with Motown until he was given autonomy to record as he please. Motown agreed and the groundbreaking Music Of My Mind was released followed the next year. Later that year came Talking Book, which boasted the no. 1 pop and R&B hits “Superstition” and “You Are The Sunshine Of My Life.” Innervisions, featuring the Top 10 hit “Higher Ground,” “Don’t You Worry ’Bout A Thing” and the epic “Living For The City,” was a landmark LP that became the his first of three consecutive Grammy® Albums of the Year.
While the record was riding high, Wonder was in a near-fatal accident. He recovered to record another deeply felt album, Fulfillingness’ First Finale, in 1974, that featured the no. 1 pop “You Haven’t Done Nothin’” (with the Jackson 5 on background vocals) and no. 1 R&B “Boogie On Reggae Woman.”
Songs In The Key Of Life was an instant no. 1 album, the first by an American artist to debut at the top spot, where it remained for an incredible 14 weeks. It was highlighted by the no. 1 pop and R&B hits “I Wish” and “Sir Duke.” By the late seventies, Wonder was also leading the way in New Age instrumental music with the soundtrack album Journey Through The Secret Life Of Plants, which featured the ballad hit “Send One Your Love.” He won 15 Grammys in just four years.
Wonder kicked off the eighties with his funk classic “Master Blaster (Jammin’),” a tribute to Bob Marley, and “Happy Birthday,” the theme song for the successful campaign to establish the birthday of civil rights leader Dr. Martin Luther King Jr. as a national holiday. Both were included on the album Hotter Than July. Balancing public causes and private emotion, he scored with the no. 1 R&B “That Girl” in 1982. A champion of racial harmony, he joined Paul McCartney on the no. 1 pop “Ebony And Ivory” later that year.
Wonder contributed songs to the Gene Wilder film The Woman In Red in 1984, when the theme song, “I Just Called To Say I Love You,” hit no. 1 pop, R&B and adult contemporary. It also became Wonder’s first no. 1 in the U.K. With Elton John and Gladys Knight, he also appeared on Dionne Warwick’s 1985 no. 1 pop “That’s What Friends Are For,” which benefited AIDS research. That same year, he won the Oscar® for Best Song for “I Just Called To Say I Love You”; was spotlighted in “We Are The World,” the landmark charity effort for African famine relief; and “Part-Time Lover,” from the album In Square Circle, became the first single to simultaneously top the pop, R&B, adult contemporary and dance/disco charts.
The nineties and the new millennium were marked by collaborations with artists as diverse as Prince and Sting, Babyface and Busta Rhymes, Snoop Dogg and Andrea Bocelli, Sting and Tony Bennett, and projects as varied as the Broadway musical Rent and Spike Lee’s film Jungle Fever.
Wonder was inducted into the Rock and Roll Hall of Fame in 1989. As of mid-2008, Wonder has earned 25 solo Top 10 pop hits, among them seven no. 1’s, and won 22 Grammy Awards--plus a prestigious Lifetime Achievement Grammy in 1996. His 2005 Motown album A Time 2 Love garnered six Grammy nominations and won two, including one for “So Amazing,” Wonder’s duet with Beyonce.
For Rolling Stone magazine’s 2004 article “The Immortals – The Greatest Artists Of All Time,” Elton John wrote about Stevie Wonder: “When he comes into a room, people adore him. And there aren’t many artists like that. People admire you and they like your records, but they don’t want to stand up and hug you. But this man is a good man. He tries to use his music to do good. His message, I think, is about love, and in the world we live in today, that message does shine through.”