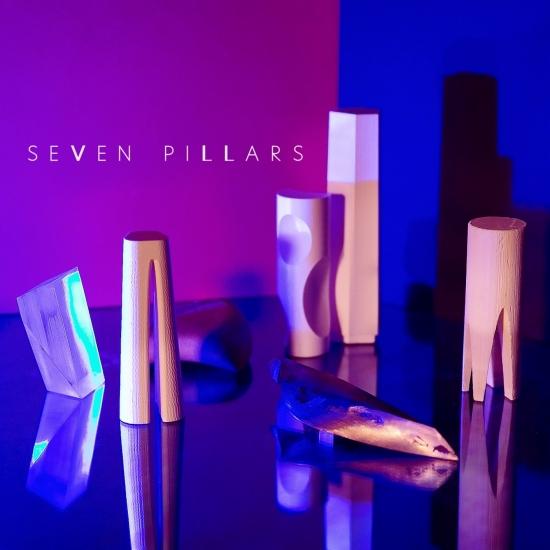 Critically-acclaimed composer Andy Akiho and Sandbox Percussion announce the release of Akiho’s “Seven Pillars,” a boldly genre-defying audio and video collaboration for percussion quartet. The work consists of seven ensemble movements and one solo movement for each member of Sandbox, developed through multiple extended residencies at Avaloch Farm Music Institute.
Performed by Sandbox, this evening-length work is the largest-scale chamber music work that Akiho has written and that Sandbox has commissioned. Akiho and Sandbox’s ongoing collaboration for “Seven Pillars” has spanned on and off for 8 years. It has been a labor of love between friends and towards the end of the project, Akiho and Sandbox expanded the collaborative circle.
Akiho and Sandbox Percussion commissioned 11 video artists to create original films for “Seven Pillars” – one film for each movement of the work. These collaborative videos encompass the worlds of dance, animation, experimental narrative film, time-lapse, and more.
“I’ve never taken on a project this ambitious – it’s nearly 80 minutes of music – but I was inspired by the collaborative relationship I have with Sandbox,” says Akiho. “We’re all close friends, we enjoy making music together, and there is freedom to experiment in that type of environment. The instrumentation includes traditional instruments such as vibraphone, glockenspiel, and marimba, with some found percussion sounds like glass bottles and metal pipes. Creatively, I wanted to limit the instrumentation in order to encourage the opportunity to find unique timbres and playing techniques on each instrument.”
The form of “Seven Pillars” mirrors the ambitious nature of this multimedia work. The seven main movements function as a palindrome, with the music and their corresponding films highlighting the relationships between the various movements.
Virtual and in-person performance dates for “Seven Pillars” will follow this fall and winter. The world-premiere live performance will take place at Emerald City Music December 3 and 4, 2021, with an accompanying light show designed by famed theater director Michael McQuilken.
Andy Akiho, percussion
Sandbox Percussion 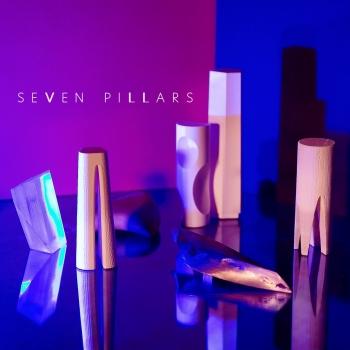 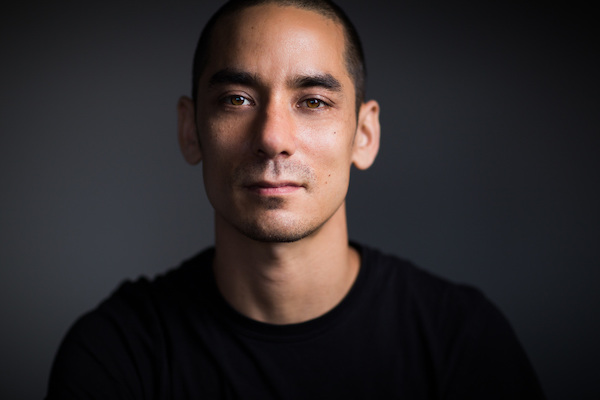 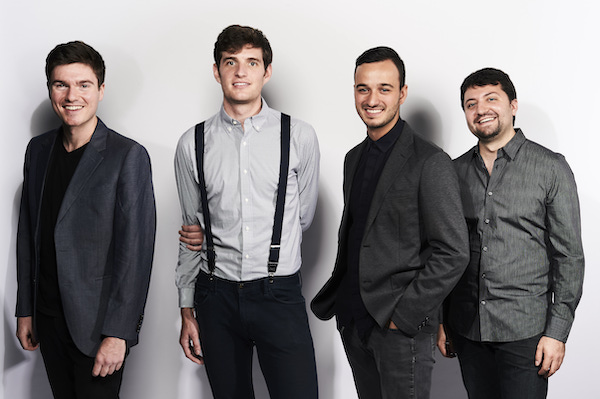 Andy Akiho
Described as “trailblazing” (LA Times) and “an imaginative composer” (NY Times), Andy Akiho is a composer and performer of new music.
​Recent engagements include commissioned premieres by the New York Philharmonic, National Symphony Orchestra, Shanghai Symphony, China Philharmonic, Guangzhou Symphony, Oregon Symphony with Soloist Colin Currie, American Composers Orchestra, Music@Menlo, Chamber Music Northwest, Carnegie Hall’s Ensemble Connect, LA Dance Project, and experimental opera company The Industry.
Akiho has been recognized with many prestigious awards and organizations including the Rome Prize, Lili Boulanger Memorial Prize, Harvard University Fromm Commission, Barlow Endowment, New Music USA, and Chamber Music America. Additionally, his compositions have been featured on PBS’s “News Hour with Jim Lehrer” and by organizations such as Bang on a Can, American Composers Forum, The Intimacy of Creativity in Hong Kong, and the Heidelberg Festival. ​
Akiho is also an active steel pannist and performs his compositions with various ensembles worldwide. He has performed his works with the Charlotte Symphony, South Carolina Philharmonic, Grand Rapids Symphony, Nu Decco Ensemble, LA Philharmonic’s Green Umbrella Series, the Berlin Philharmonic’s Scharoun Ensemble, Miyamoto is Black Enough, the International Drum Festival in Taiwan, and has had four concerts featuring his compositions at the Kennedy Center in Washington, DC. Akiho’s recordings No One To Know One (innova Recordings) and The War Below (National Sawdust Tracks) features brilliantly crafted compositions that pose intricate rhythms and exotic timbres inspired by his primary instrument, the steel pan.
Akiho was born in 1979 in Columbia, SC, and is currently based in New York City and Portland, OR.
Sandbox Percussion
is a quartet that shares meaningful musical experiences with communities worldwide through performance, collaboration, and education, to inspire and cultivate creativity, conscientiousness, and cooperation.
Described as “exhilarating” by The New York Times, and “virtuosic and utterly mesmerizing” by The Guardian, Sandbox Percussion has established themselves as a leading proponent of this generation of contemporary percussion chamber music. Brought together by their love of chamber music and the simple joy of playing together, Sandbox Percussion captivates audiences with performances that are both visually and aurally stunning. Through compelling collaborations with composers and performers, Jonathan Allen, Victor Caccese, Ian Rosenbaum, and Terry Sweeney seek to engage a wider audience for classical music.
Sandbox Percussion performs throughout the United States and made their United Kingdom debut in 2019 at the Vale of Glamorgan Festival in Cardiff where they premiered a new work by Benjamin Wallace for percussion quartet and fairground organ. In the 2019-20 season Sandbox Percussion premiered Don’t Look Down, a new work by Christopher Cerrone, with pianist Conor Hanick, as part of a new live stream concert series at the Caramoor Center for Music. They also presented a performance at Dumbarton Oaks of a new work by Viet Cuong. Sandbox Percussion has presented four separate programs of music by John Luther Adams at Storm King Art Center, Tippet Rise Art Center, Caramoor Center for Music and the Arts, and the String Theory concert series in Chattanooga, TN. Sandbox performed Viet Cuong’s concerto Re(new)al with the Albany Symphony and the Curtis Symphony Orchestra, as well as premiered a wind ensemble version of the work with the Brooklyn Wind Symphony. Sandbox collaborated with actor and writer Paul Lazar on a portrait concert of music by John Cage at the Institute for Advanced Study at Princeton University, and gave three sold out performances of Music for Eighteen Musicians with Emerald City Music in Seattle, WA.
In addition to maintaining a busy concert schedule, Sandbox has also led masterclasses and coachings at schools such as the Peabody Conservatory, Curtis Institute, the University of Southern California, Kansas University, Cornell University, and Furman University. While there, they coached students on some of the most pivotal works in the percussion repertoire including Steve Reich’s Drumming, György Ligeti’s Síppal, Dobbal, Nádihegedüvel, and John Cage’s Third Construction. These teaching experiences have inspired the quartet to pursue a role of pedagogy and mentorship for today’s young generation of musicians. In 2016, Sandbox Percussion founded the NYU Sandbox Percussion Seminar – this week-long seminar invites percussion students from across the globe to rehearse and perform some of today’s leading percussion chamber music repertoire at the iconic Brooklyn venue National Sawdust.
In 2020, Sandbox Percussion released their debut album And That One Too on Coviello Classics. The album features works by longtime collaborators Andy Akiho, David Crowell, Amy Beth Kirsten, and Thomas Kotcheff.
In the 2020-21 season, Sandbox Percussion will launch a group of new virtual initiatives: a concert series live-streamed from their studio in Brooklyn, #sandboxsunday – a live-streamed series of conversations with composers, performers and other close collaborators, and monthly live-readings of new works submitted by composers from around the world. In 2021, Sandbox will release Seven Pillars, an evening-length commissioned work by Andy Akiho, with staging and lighting design by Michael McQuilken.