The Soft Parade The Doors 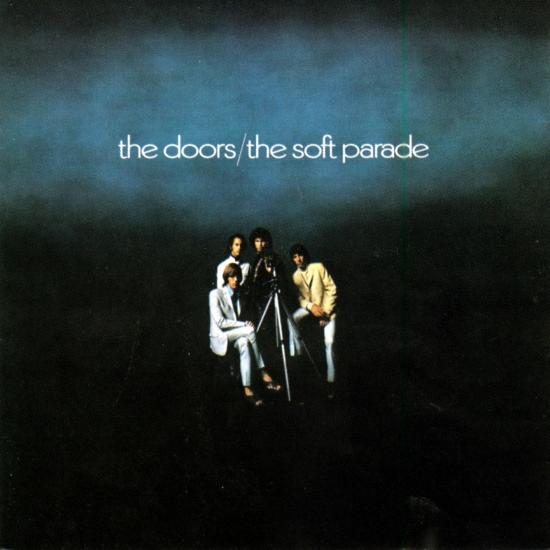 The Soft Parade, first released in 1969, climbed to #6 and featured the #3 hit "Touch Me," "Shaman's Blues," "Wild Child," and more.
"A front page ad in Billboard says it: "Initial orders promise it will attain the instant solid gold status of their first three albums." It looks like it will, but not because anyone listened to the record.
Alternate suggested titles for The Soft Parade would be The Worst of the Doors, Kick Out the Doors, or best, The Soft Touch.
The Soft Parade is worse than infuriating, it's sad. It's sad because one of the most potentially moving forces in rock has allowed itself to degenerate. A trite word, but true.
The Soft Parade represents a clear and present decline in musicianship. This is quite apart from stage showmanship, or even "drama." The Doors are obviously more potent than ever. But the Doors are a rock group, and at heart a rock group must produce vital, listenable, interesting music, or the rest is just so many limp wicks waving in the Miami breeze.
And this gorgeous-looking album is not vital, not very listenable and is certainly not interesting. It sounds for all the world like the stuff they had the good sense to leave off their first albums. The weaknesses cannot be palmed off as experimentation, because, despite the addition of strings and horns, it's just the same. The same but worse.
Ok, there are two un-Doors-like songs, both written by Robbie Krieger. "Touch Me" and "Follow Me Down" are horn-string showpieces for the resonant baritone of Jim Morrison that aren't the worst of the Doors. They're the worst of Jerry Vale or the worst of Andy Williams. While the Doors' reductio-ad-absurdum poetry could usually be disguised by invigorating (if not very convincing) emotion, these damn songs stick that idiocy right up front and surround it with the most cliche-ridden sounds this side of the 101 Strings.
The remainder of the songs sound like the Doors alright, but they're pale shadows of their earlier works. The Doors' power is also their weakness. They have had from the beginning, and still have, one of the cleanest, most solid and, above all, most recognizable sounds in rock. Part of this is the Morrison power, but the other Doors are equally responsible. There is rarely any doubt that you're listening to the Doors. It's a great sound, a successful sound, but it forces a highly directional form of musical invention on the Doors and it is this that they have not been able to maintain. Instead they've just gone from excess to excess.
"Running Blue" is a superb example. It's hard to imagine Doors' poetry getting more excessive than it's been, but listen to this:
Poor Otis dead and gone
Left me here to sing his song
Pretty little girl with the red dress on
Poor Otis dead and gone.
Can you dig it? Or, better yet, "Do It."
Please please listen to me children
Please please listen to me children
Please please listen to me children
Please please listen to me children
You are the ones who will rule the world.
And if, as Morrison himself says, the words don't count and the mood created is the important facet of the Doors' rock, then they've really bummed out on this one. The mood they've created is loud, dull boredom. There are some good images, some good musical licks, but it just isn't worth shuffling through the rest of this scree to find the few semi-precious stones.
What little good there is on the album is mostly in the title cut, "The Soft Parade." But the thing is so mangled, so jammed together and frequently so silly that it's kind of hard to listen all through its 8:40 for the good.
With individual credit now being given for the songs, it's plain that Morrison's songs are better than Krieger's. But it's just the lesser of two evils.
In any case, with this album, the Doors appear to be in the final stages of musical constipation. Morrison admits that they haven't done any new material in three years, and unless something drastic happens, the next album ought to be an epitaph.
I highly recommend The Soft Parade for these people like Dunbar in Catch-22 who like to be bored to tears in order to make the time pass more slowly. Otherwise, don't bother. (Alec Dubro, Rolling Stone)
Jim Morrison, vocals
Robby Krieger, guitars
Ray Manzarek, keyboards & Fender piano bass
John Densmore, drums & percussion
Guests:
Douglas Lubahn, bass
Harvey Brooks, bass
Reinol Andino, congas
Champ Webb, english horn
Jimmy Buchanan, fiddle
Jesse McReynolds, mandolin
Curtis Amy, saxophone
George Bohanan, trombone
Paul Harris, conductor
Produced by Bruce Botnick & Jac Holzman
Mastered by Bruce Botnick & The Doors
Recorded at Elektra Sound Recorders, Los Angeles
Digitally remastered.