It's Nice to Be with You: Jim Hall in Berlin (Live Remastered) Jim Hall 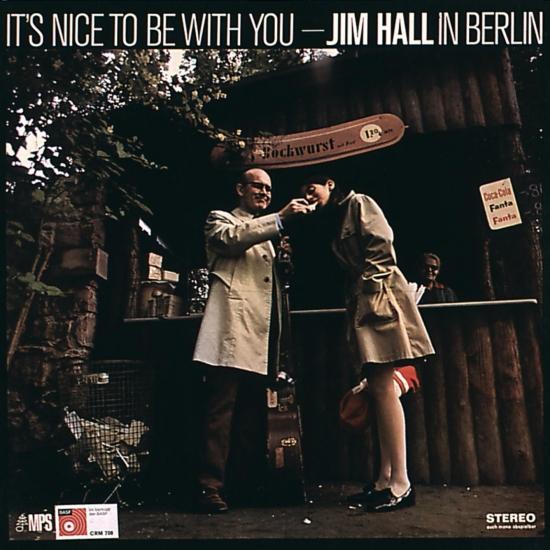 Info zu It's Nice to Be with You: Jim Hall in Berlin (Live Remastered)

The intimate musical get together that occurred in June 1969 was due to a large extent to the close friendship between the inimitable American guitarist Jim Hall and Producer Joachim Ernst Berendt. As Hall was visiting him in Berlin, Berendt proposed a recording with bassist Jim Woode and drummer Daniel Humair; this configuration developed into an intensely introspective session. In such a transparent setting, Hall unfurled all his finest qualities – what Humair perceptively summed up as “clarity, purity, sensitivity”. Hall’s harmonic brilliance on “Up, up and Away”, demonstrates how he could turn a pop melody into his own, and “Blue Joe” reveals a free approach to the blues. Whereas brilliantly coordinated interplay comes to the forefront on the title piece, there are also amazing solo elements. In the style of his idol Bill Evans, Hall engages in an intensive conversation with himself on “In a Sentimental Mood” and the tender “Young One”; no note is superfluous, and every tone is heart-felt. With its sophisticated Bossa mood, “Romaine” delivers a surprising finale to the record. Jim Hall had to wait for over a decade to record a second album under his own name. This recording was ample compensation for the long wait he and his fans endured.
„Jim Hall recorded this trio session with expatriate bassist Jimmy Woode and one of Europe's top drummers, Daniel Humair, during a 1969 visit to Berlin. At first 'Up, Up and Away,' a Jimmy Webb composition that turned into a huge hit for the pop group the Fifth Dimension, might seem like an unlikely jazz vehicle, but it soars to new heights with the trio's inventive approach. Familiar standards include a snappy 'My Funny Valentine' and an intensely lyrical 'Body and Soul.' Producer Joachim Berendt's suggestion to Hall that he duet with himself via overdubbing resulted in 'Young One, For Debra,' a warm ballad tribute to Hall's daughter, and a breath taking rendition of 'In a Sentimental Mood.' He also revisits his 'Romaine,' utilizing a bossa nova setting (recorded previously with pianist Bill Evans on their classic duo date Undercurrent) and explores his wife's upbeat composition 'It's Nice to Be with You' (a work that should have lyrics if it doesn't already). Only briefly available as a CD reissue of the earlier LP, this collectible release is well worth acquiring.“ (Ken Dryden, AMG)
Jim Hall, guitar
Jimmy Woods, bass
Daniel Humair, drums
Recorded 27-28. June 1969 at Teldec Studio Berlin
Engineered by Eberhard Sengspiel
Produced by Joachim Ernst Berendt
Digitally remastered