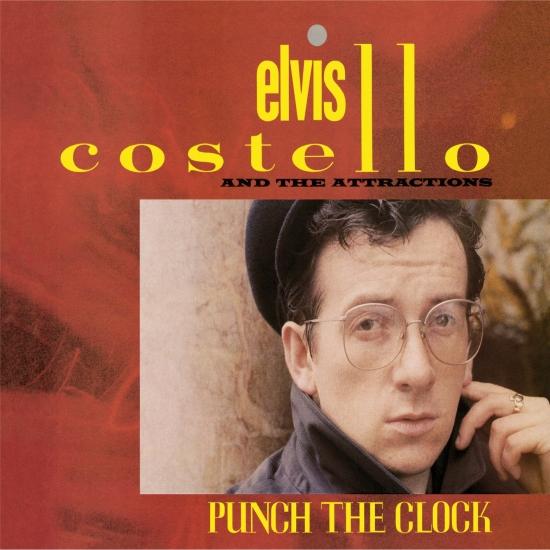 A return to the world of straightforward pop music, PTC swings with startling horn arrangements from subtle poignancy to full blown hook-laden mini-epics. Though best-known for soulful struts like "Let Them All Talk" and "Everyday I Write the Book" (one of the most obvious hit singles of his career), PUNCH THE CLOCK also contained a pair of unsettling topical works, "Pills & Soap" (originally rush-released in the UK in hopes of putting a monkey-wrench in the Thatcher re-election) and "Shipbuilding," an early response to the Falklands war, featuring a haunting trumpet solo by the late Chet Baker). These tracks provide a balance to the lusher popcraft of the other tracks.
In the detailed liner notes that accompany the package, Costello writes that he was eager to become "reacquainted with the wonderful world of pop" since the release of the more somber albums, ALMOST BLUE and IMPERIAL BEDROOM. Renowned hit-making producers Clive Langer and Alan Winstanley (Dexy's Midnight Runners, Madness) helped Costello achieve a polished sound which paid off with two chart-topping US singles, "Let Them All Talk" and "Everday I Write the Book" (featuring guest vocalist Caron Wheeler, who later sang lead on Soul II Soul's smash "Back to Life"). The seven extended play tracks include the B-sides "Heathen Town" and "Flirting Kind", "Walking on Thin Ice" (from the Yoko Ono tribute album EVERY MAN HAS A WOMAN), and the unreleased demos "Town Where Time Stood Still" and "Shatterproof" (later recorded by Rockpile's Billy Bremner). Rounding out the album's bonus material are rare live versions of "The World and His Wife" and "Everyday I Write the Book," both very different from their studio counterparts.
„Perhaps frustrated by the lack of commercial success Imperial Bedroom encountered, Elvis Costello enlisted British hitmakers Clive Langer and Alan Winstanley to produce its follow-up, Punch the Clock. The difference between the two records is immediately noticeable. Punch the Clock has a slick, glossy surface, complete with layered synthesizers, horns, studio effects, and the backup vocals of Afrodiziak. The approach isn't necessarily a misguided one, since Costello is as much a pop musician as he is a singer/songwriter and many of the best moments on the record -- "Everyday I Write the Book," "Let Them All Talk" -- work well as shiny pop singles. However, the problem with Punch the Clock is that Costello is entering a fallow songwriting period; it is his least consistent set of original songs to date. The best moments, the antiwar ballad "Shipbuilding" and the eerie pseudo-rap "Pills and Soap," are as articulate and effective as any of his past work, but frequently Costello falls short of meeting his standards, particularly when he's trying to write a song in the style of his older songs. Nevertheless, the sheen of the Langer and Winstanley production makes Punch the Clock a pleasurable listen. Costello's uneven writing means that only portions of the album are memorable.“ (Stephen Thomas Erlewine, AMG)
Elvis Costello, vocals, guitars, Synclavier
Steve Nieve, piano, Emulator, Fairlight CMI, Vox organ, Hammond organ, Synclavier
Bruce Thomas, Electric Wal bass guitar
Pete Thomas, drums
The TKO Horns:
Jim Paterson, trombone
Jeff Blythe, alto saxophone, baritone saxophone, clarinet
Paul Speare, tenor saxophone, flute
Dave Plews, trumpet
Additional musicians:
Stewart Robson, trumpet & flugelhorn on "The World and His Wife"
Afrodiziak (Caron Wheeler and Claudia Fontaine), backing vocals
Chet Baker, trumpet solo on "Shipbuilding"
David Bedford, string arrangements
Morris Pert, percussion
Recorded January–April 1983
Produced by Clive Langer & Alan Winstanley, assisted by Gavin Greenaway & Colin Fairley
Digitally remastered