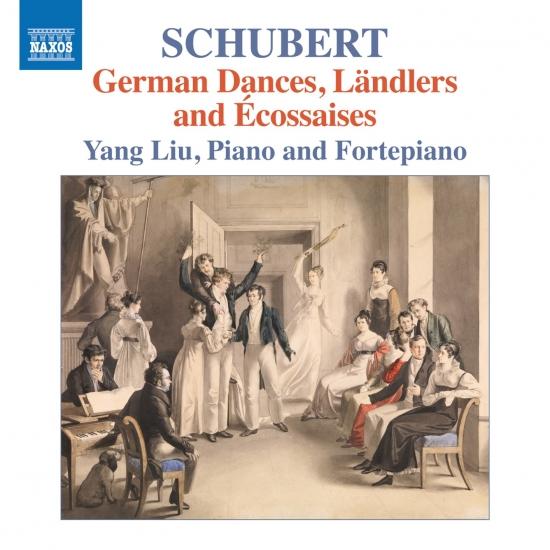 Schubert was known in his time primarily as a composer of songs, but he was also a master of the dance form and wrote prolifically for a middle-class society eager for domestic entertainment. He loved Ländler (triple time country dances), the Écossaises (supposedly Scottish), and the rich variety of genial German dances. Viennese pianos of the day produced a sound that was clear and transparent, very different from modern instruments, and in this recording Yang Liu plays on a Steinway grand and a copy of a mid-1820s fortepiano by Conrad Graf, a maker well known to Schubert.
Yang Liu, piano, fortepiano 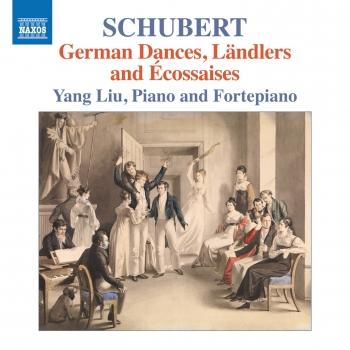 Yang Liu
attracts worldwide audiences with her profound musicianship and extraordinary virtuosity. Since her concerto debut at the age of 14 with the Fort Worth Symphony Orchestra, she has performed extensively throughout the US, Europe, and China. She has won many prestigious competitions, including the first prize of the Toronto International Piano Competition, second prize of the Serge & Olga Koussevitzky Young Artist Awards, fourth prize of the Fifth International Frederick Chopin Competition for Young Pianists, two-time second prizes of the Xing Hai Cup National Piano Competition in China, winner of the Juilliard Nordmann Scholarship Competition, the Concerto Competition in Aspen Music Festival and School, the Concerto Competition in PianoTexas Festival, and many others.
Ms. Liu has performed at many prominent venues, including Lincoln Center, Merkin Concert Hall, and Liederkranz Hall in New York (USA), Ed Landreth Hall in Fort Worth (USA), the VanTrease Performing Arts Center in Tulsa (USA), the Koerner Hall in Toronto (Canada), the Forbidden City Concert Hall and Beijing Concert Hall in Beijing (China), Hong Tai Concert Hall in Xiamen (China), the Château de Fontainebleau and the Grand Temple de Lyon in France, the Mäntän Klubi in Mänttä (Finland), Ruïnekerk in Bergen (Holland), among others. She has also been invited to perform in numerous music festivals, including the Aspen Music Festival and School, the PianoTexas Festival, the Fontainebleau Schools of Music, the Internationale Konzertarbeitswochen in Goslar, the Holland Music Sessions, the Mänttä Music Festival, and others. Ms. Liu has performed for masterclasses of Murray Perahia, Richard Goode, Paul Badura-Skoda, Arie Vardi, Malcolm Bilson and others.
During her studies at The Juilliard School, Ms. Liu has performed frequently as a pianist, harpsichordist, fortepianist, and a chamber musician in various events, such as the Focus! Festival and the Senior Dance Production. She also organized and performed concerts in tribute to Lionel Party in 2011 and to Debussy’s 150th birth year in 2012. Her interests in early music and early keyboard instruments led her to study harpsichord with Lionel Party and fortepiano with Audrey Axinn. In the 2014-15 season, Ms. Liu will be featured as guest artist in the Musicians Club of New York’s concert series and will also be giving her concerto debut in Canada with the Toronto Symphony Orchestra and Toronto Concert Orchestra.
Ms. Liu was born in Fuzhou, Fujian, China. She showed her prodigious talents toward the arts in her youth and started to learn music when she was six years old. During her fourth grade, she decided to devote herself entirely to music and auditioned for the Primary School Affiliated with the Central Conservatory of Music in Beijing and was admitted with high remarks. Due to highly satisfactory grades, she was exempted from auditioning and was accepted directly into the Middle School Division. In 2007, after graduating from the middle school, Ms. Liu was admitted to the Pre-college Division of The Juilliard School and studied with Victoria Mushkatkol. In 2009, she entered the College Division and has studied under the tutelage of Dr. Yoheved Kaplinsky since then. Ms. Liu received her Bachelor’s Degree for Music from Juilliard in 2013 and is currently pursuing her Masters.