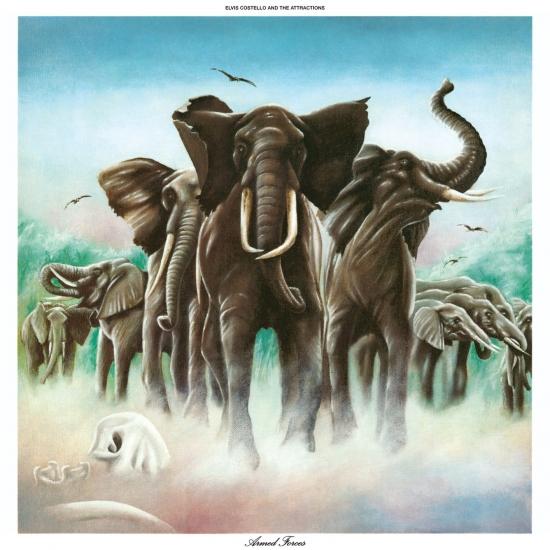 Newly remaster! Armed Forces was the third studio album from Costello and second with The Attractions, arriving in January 1979. It was originally conceived under the title Emotional Fascism, which says a lot about the artist’s state of mind while writing and recording. Much was made at the time about Costello moving away from the punk sound of its predecessors and embracing a new wave style, but (then as now) genre tags were simply reductive when it came to Costello’s oeuvre. He brought a deep and abiding love of pop, rock, and R&B in all their forms to Armed Forces, turning in some of his most beloved compositions including “Oliver’s Army” (anchored by Steve Nieve’s ABBA-inspired keyboard riff) about the Troubles in Northern Ireland; the tense, paranoid “Green Shirt”; and elegant, haunting “Accidents Will Happen,” inspired by Burt Bacharach and Hal David’s “Anyone Who Had a Heart.” One of the LP’s most famed songs wasn’t on the original U.K. issue, however. “(What’s So Funny ‘Bout) Peace, Love, and Understanding” was introduced by Nick Lowe – the producer of Armed Forces – by his band Brinsley Schwarz in 1974 and re-recorded by Costello, The Attractions, and producer Lowe in 1978 credited to “Nick Lowe & His Sound.” Costello’s biting rendition was added to the U.S. version of the album where it replaced “Sunday’s Best.”
„After releasing and touring the intense This Year's Model, Elvis Costello quickly returned to the studio with the Attractions to record his third album, Armed Forces. In contrast to the stripped-down pop and rock of his first two albums, Armed Forces boasted a detailed and textured pop production, but it was hardly lavish. However, the more spacious arrangements -- complete with ringing pianos, echoing reverb, layered guitars, and harmonies -- accent Costello's melodies, making the record more accessible than his first two albums. Perversely, while the sound of Costello's music was becoming more open and welcoming, his songs became more insular and paranoid, even though he cloaked his emotions well. Many of the songs on Armed Forces use politics as a metaphor for personal relationships, particularly fascism, which explains its working title, Emotional Fascism. Occasionally, the lyrics are forced, but the music never is -- the album demonstrates the depth of Costello's compositional talents and how he can move from the hook-laden pop of "Accidents Will Happen" to the paranoid "Goon Squad" with ease. Some of the songs, like the light reggae of "Two Little Hitlers" and the impassioned "Party Girl," build on his strengths, while others like the layered "Oliver's Army" take Costello into new territories. It's a dense but accessible pop record and ranks as his third masterpiece in a row.“ (Stephen Thomas Erlewine, AMG)
Elvis Costello, guitar, vocals
Steve Nieve, piano, organ, synthesizer
Bruce Thomas, bass
Pete Thomas, drums
Recorded August 1978–September 1978, Eden Studios, London
Engineered by Roger Bechirian
Produced by Nick Lowe
Digitally remastered by Bob Ludwig