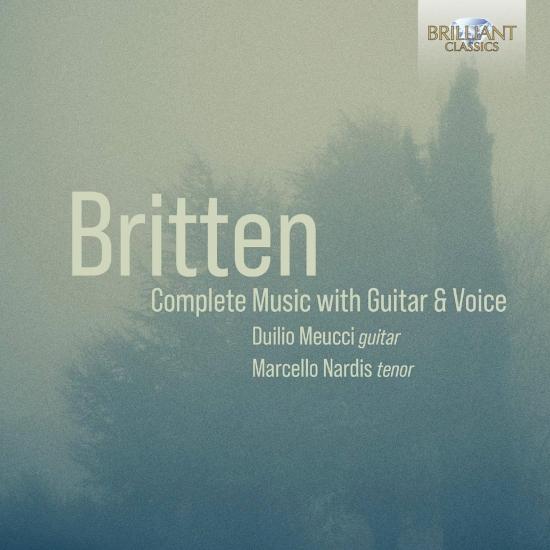 The guitar music of eminent 20th-century British composer Benjamin Britten (1913–1976) comprises three works, all of them written with the great guitarist Julian Bream in mind. Two of these are sets of songs for high voice, for which Britten’s vocal model was of course the famous English tenor – and Britten’s long-time personal and professional partner – Peter Pears.
The “Songs from the Chinese”, a cycle of six songs on poems translated from the original Chinese by Arthur Waley (1889–1966), were written in 1957 and premiered the following year by the duo of Pears and Bream. By the late 50s Bream was a lutenist and guitarist of great renown and had accompanied Pears in works by Dowland and other early music of the British Isles, concerts that inspired Britten to write for the duo some music of his own. His cycle naturally invited comparison with another great set of songs from the Chinese, Mahler’s “Das Lied von der Erde”, and the reception at the time was favourable: “as a whole, they make a statement about life (and particularly the transience of youth and beauty) as poignant and personal as Mahler’s” (critic Jeremy Noble in Tempo,1959).
The sixth instalment of Britten’s lifelong project of folksong arrangements was published in November of 1961 in a second wave along with volumes four and five, which followed some 12 years after the first three volumes were issued in the 1940s. Volume Six contains six English folksongs and is the only one of the sets that he scored for voice and guitar. These folksong arrangements are as much a product of Britten’s admiration for Bream as are the “Songs from the Chinese”. In fact, when Pears and Bream premiered Britten’s song cycle at the Aldeburgh Festival (17 June 1958), they performed three of these folksongs on the same concert.
Britten wrote the guitar solo “Nocturnal” after John Dowland in 1963 for Bream, who premiered it the following year (12 June 1964). The nine movements of the work are a “variations & theme”, progressing opposite to the usual order of a theme and variations. The model, “Come, Heavy Sleep” from the First Book of Songs by John Dowland (1563–1626), is only revealed at the end, with the variations leading up to it hinting at the song with treatments of various thematic fragments.
Marcello Nardis and Duilio Meucci complete this album with three additional works by Dowland including the original “Come, Heavy Sleep” on which Britten based his Nocturnal, another well-known song, “Flow my tears”, and the lute solo “A Dream”.
Duilio Meucci, guitar
Marcello Nardis, tenor 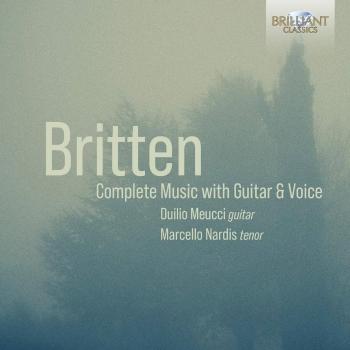 Duilio Meucci
born in Naples in 1985, began studying classical guitar with Luciano Accarino. Graduated with full marks and honors at “Domenico Cimarosa” Conservatory in Avellino, in 2005 he attended the courses of the “Guitar Summer School” run by Angelo Gilardino and Luigi B Caldo.
His concerts, which see him performing both as a soloist and in duo, with the violist Francesco Venga and the flutist Marco Salvio , have led him to perform for institutions such as Accademia della Chitarra of Brescia, MozArt Box, Teatro San Babila in Milan, MADRE Museum of Naples, Italian Guitar Festival, Capri Culture Institution, ISU Bocconi Concert Review in Milan, Mantua Trame Sonore Festival. He has also established himself in numerous national and international competitions, being always among the first places, and obtaining, among the others, the 1st prize at the “Giulio Rospigliosi” Chamber Music Competition for Duos.
Duilio Meucci is the dedicatee of the first work for guitar and viola written by guitarist-composer Dusan Bogdanovic in 2012, entitled “Trois à propos” and of “Sonatina-Lied n. 7”, again for guitar and viola, by Angelo Gilardino. In October 2010, his first album “Generations” was released, produced by the GuitArt label, focused on the work of three guitar composers from different generations: Gilardino (1941), Bogdanovic (1955) and Bellomo (1980).
In 2012, Duilio Meucci obtained the Master of Art in concert at the Haute Ecole de Musique in Geneva, under the guidance of Dusan Bogdanovic. He made his debut in the “Concierto para dos guitarras y orquesta da camara” by Guido Santorsola, directed by Marco SalvioIn in duo with the Chilean guitarist Claudio Rojas at the Grande Salle of the Haute Ecole de Musique in Geneva, in May 2013.
In July 2013, he was admitted as an active student to the summer courses of the Chigiana Academy of Siena. With the aim of spreading the music of the French composer Claude Bolling, he has been carrying out the BOLLING PROJECT with the jazz trio of Andrea De Fazio, Roberto Porzio and Paolo Petrella, and the mandolin of Raffaele La Ragione since September 2014. In April 2016 the major record company Brilliant Classics distributes his second album entitled “Invention” connected to his activity with BOLLING PROJECT.
Parallel to his musical activity, Duilio Meucci started working in video-audio production field, developing projects as director and artistic director on music scene greatest protagonist such as Alexander Lonquich, Roberto Prosseda, Mantua Chamber Orchestra, Cremona Mondo Music, Carlotta Dalia, Giampaolo Bandini, Pietro Locatto, Gravedona Chamber Music Festival, “Licinio Refice” Conservatory of Frosinone.
Marcello Nardis
initiated his musical studies in flute and composition. Broadening his expertise, he earned degrees in piano performance at Conservatorio Santa Cecilia, Rome, voice performance at Conservatorio San Pietro a Majella, Naples and vocal chamber music at Conservatorio Luigi Cherubini, Florence.
He graduated with honors in Ancient Greek (La Sapienza, Rome), Christian Archaeology and Musical Pedagogy (Alma Mater, Bologna) and further expanded his musical studies at the F. Liszt Hochschule, Weimar with Peter Schreier and at Mozarteum, Salzburg with Kurt Widmer.
Already a well-established pianist, Marcello made his debut as a tenor in 2003, singing for Pope John Paul II during the World Youth Day celebrations in Toronto, Canada. He has collaborated with such internationally acclaimed artists as Battistoni, Chung, Luisi, Mehta, Muti, Rousset, Sardelli, Savall, Badura-Skoda, Bacchetti, Ballista, Campanella, Canino, Ciccolini, De Fusco, Fiuzzi, Prosseda, Shetler and West and has performed at venues and festivals including Teatro alla Scala, Milan, Accademia Nazionale di Santa Cecilia, Rome, Teatro La Fenice, Venice, Teatro di San Carlo, Naples, Teatro Carlo Felice, Genoa, Filarmonico Arena di Verona, Teatro Massimo, Palermo, Maggio Musicale Fiorentino, Teatro Bellini, Catania, Liceu in Barcelona, Smetana Hall, Prague, St Martin-in-the-Fields, London, New National Theatre, Tokyo, Opera of Hanoi, Salzburg Festival, Festival dei due Mondi and Teatro Sperimentale, Spoleto, Oxford Lieder Festival, Stadthalle, Bayreuth and Carnegie Hall, New York.
Marcello Nardis has appeared in more than 100 public performances of Schubert’s Winterreise, often acting simultaneously as pianist and singer.
In the 2017 he sang: Die Zauberflöte in Florence and As.Li.Co circuit, Lucia di Lammermoor in Venice, Turandot in Genova and Macerata.
Among his recent engagements: Raoulin Die Lustige Witwe in Venice, Il flauto magico in Salerno, Lucia di Lammermoor (Arturo) in Genoa and Die Winterreise at the Maggio Musicale Fiorentino.
Among his recent and future engagements: Turandot, La Traviataand Pagliacci at the Arena of Verona, Madama Butterfly in Caserta and Verona, Die Zauberflöte at the Opera of Rome, La forza del destino and Falstaff in Piacenza, Modena and Reggio Emilia, Die Lusitge Witwe in Rome and Naples.