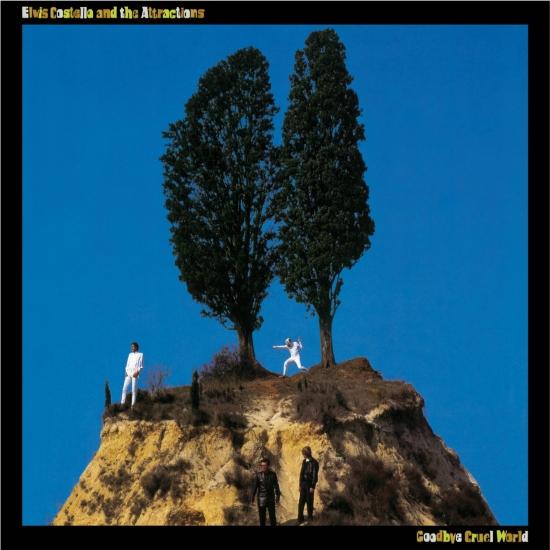 This may be the most maligned item in the Costello catalogue -- not least by Costello himself who opens his liner notes with 'Congratulations! You have just bought our worst album!' It's certainly the oddest album Costello and the Attractions ever made together, but that's not always a bad thing: Tracks like 'The Home Truth,' 'Love Field' and the single 'The Only Flame in Town' show a move toward the deeper, more challenging song structures that Costello would master in the '90s. The Clive Langer/Alan Winstanley-produced album includes other notable tracks such as 'I Wanna Be Loved', a cover tune with a scorching vocal performance, and 'The Comedians,' which was covered by no less an authority than Roy Orbison.
The extended-play tracks shed more light on this phase of Costello's development, with tracks like 'Baby It's You' (a duet with old mate Nick Lowe) and 'Turning the Town Red' showing a more carefree pop feel than anything on the official album. More significant are a pair of tracks from Costello's first-ever solo tour, with 'Worthless Thing' and 'The Only Flame in Town' given a more direct lyrical emphasis. Fans can also take note of a rare Richard Thompson cover, 'Withered & Died', plus a 'lost' Costello single: 'I Hope You're Happy Now' which would show up with a radically different arrangement on BLOOD & CHOCOLATE.
„During the making of Goodbye Cruel World, Elvis Costello was undergoing a multitude of personal problems, including a divorce, that resulted in a number of poor production decisions and ill-conceived, unformed songs. Like Punch the Clock, Goodbye Cruel World was produced by Clive Langer and Alan Winstanley, the top British hitmakers of the '80s. Consequently, most of the record suffers from a stiff, synthesized production that instantly dates the record. In some cases -- like the duet with Daryl Hall, 'The Only Flame in Town,' and the cover of the lost Hi R&B gem 'I Wanna Be Loved' -- the songs benefit from the shiny, streamlined production but it obscures the merits of the finest songs on the album. 'Room with No Number,' 'The Comedians,' 'Sour Milk-Cow Blues,' and 'Peace in Our Time' all cry out for a simple, stripped-down presentation, but they're weighted down with stylized sounds and trendy synthesizers; however, once the sound of the album settles in, the strength of these songs is apparent. The remainder of Goodbye Cruel World isn't as memorable, primarily because Costello's uninspired vocals and the Attractions' muted performances fail to make the weaker songs musically compelling.“ (Stephen Thomas Erlewine, AMG)
Elvis Costello, vocals, guitar & anvil
Bruce Thomas, bass
Pete Thomas, drums
Gary Barnacle, saxophone
Jim Paterson, trombone
Luis Jardim, percussion
Daryl Hall, vocals (on „The Only Flame In Town“)
Green Gartside, vocals (on „I Wanna Be Loved“)
Recorded at Sarm West Studios, assisted by Bob Kraushaar
Mixed at Genetic Studios, assisted by Jim Russell
Produced by Clive Langer, Alan Winstanley
Digitally remastered