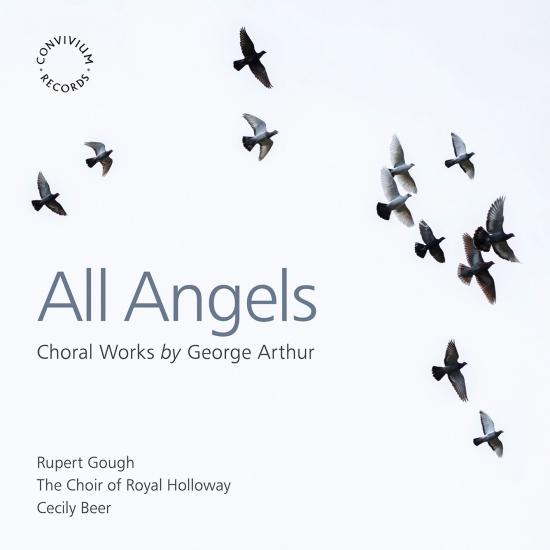 Explore this new album of choral works by British composer, George Arthur, performed by The Choir of Royal Holloway. George is a multi award-winning composer, published by Universal Editions, Music Sales, Shorter House and the Guild of Church Musicians. He has been commissioned by various cathedrals and chapel choirs at home and overseas and his music is regularly performed around the world. He has had works broadcast on BBC Radio 3 and 4 and on BBC television, most notably for the WW1 Commonwealth commemoration service, live from Glasgow Cathedral.
Cecily Beer, harp
The Choir of Royal Holloway
Rupert Gough, conductor 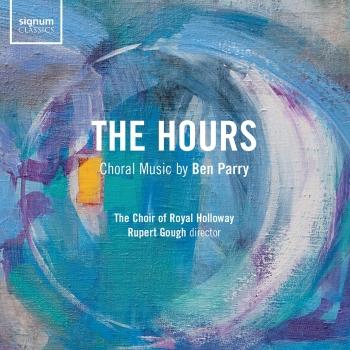 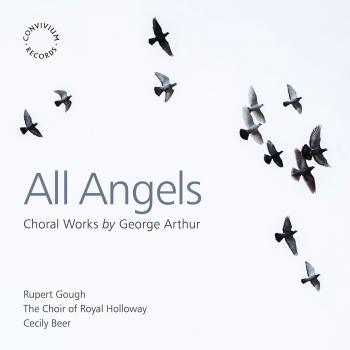 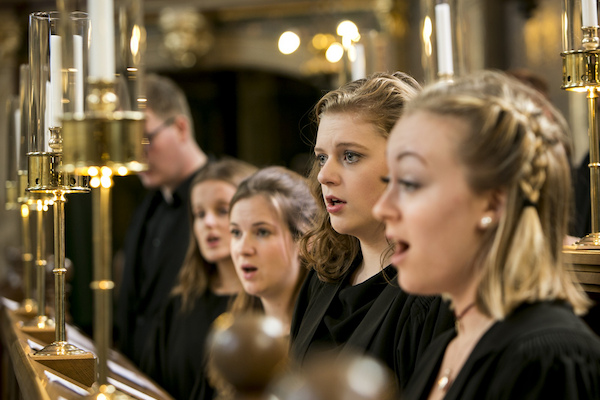 The Choir of Royal Holloway
is unique in the UK as the only collegiate choir with a weekly programme of services and concerts and is considered to be one of the finest mixed-voice collegiate choirs in Britain. The choir gives 50-plus concerts a year with a particular specialism in collaborating with living composers. The choir has collaborated, performed and recorded with many prestigious ensembles, including the King’s Singers, BBC Singers London Mozart Players, Tallinn Chamber Orchestra, Onyz Brass, Fretwork, and the Britten Sinfonia, including two performances of Beethoven’s Ninth Symphony under the baton of Thomas Adès in 2019.
Created at the time of the foundation of Royal Holloway in 1886, the choir was originally only for women's voices. The mixed choir now comprises 24 Choral Scholars who undertake a busy schedule of weekly services, as well as concerts, international tours, recordings and broadcasts. In addition to these, Royal Holloway is also the only university that still maintains a tradition of daily sung morning services.
Between 2009 and 2016, the choir recorded nine discs on the Hyperion record label. It is through this relationship with Hyperion Records, and subsequent live performances, that the choir developed a particular reputation for the performance of music from the Baltic region. During a tour in the summer of 2013 of all three Baltic states the choir performed as a part of the Latvian Song Festival, and with the Tallinn Chamber Orchestra in a concert (sung in Estonian) broadcast on the Estonian Day of Independence. As well as Baltic music, the choir’s eclectic repertoire has included The Vespers of Rachmaninov and Rautavarra, Gabriel Jackson’s Ave regina caelorum for choir and electric Guitar (broadcast BBC Radio 3) and newly-commissioned jazz works with Tim Garland and Gwilym Simcock (live BBC Radio 3).
The choir has toured most European countries, appeared in Beijing and been broadcast on regional and national radio and television all over the world. In the UK BBC Radio 3 have produced live broadcasts of both services and concerts. The choir has performed widely across the USA and Canada most recently in 2016 and 2018. The choir has been fortunate to sing at a number of high-profile events including the 2014 Festival of Remembrance at the Albert Hall (live on BBC TV), an awards ceremony at Buckingham Palace and performing a new John Rutter commission for the Magna Carta 800th anniversary in front of HM The Queen, the Prime Minister and Archbishop of Canterbury. Most recently they sang for the wedding of Ellie Goulding and Caspar Jopling at York Minster. Festival engagements have included the Spitalfields Festival, the Three Choirs Festival, the Windsor and Swaledale festivals, the Cheltenham Festival (with Dame Felicity Lott and the City of London Sinfonia), and residencies at the Presteigne Festival in 2011, 2015 and 2018.
Many new works have been composed for the choir as it continues to enjoy close collaborations with living composers. Carson P. Cooman composed The Revelations of Divine Love, a large new oratorio, for the choir in 2009 and a live recording of the US première is available from Albany Records in the USA. Other works written for the choir include two major works for choir and jazz trio from Tim Garland and Gwilym Simcock, and pieces by René Clausen, James MacMillan, Gabriel Jackson, Richard Rodney Bennett, Antony Pitts, Cecilia MacDowall and Paul Mealor. Working closely with composers, recording projects have included a collaboration with Ola Gjeilo (Winter Songs: DECCA), which topped the UK and US classical chart, a recording of James Francis Brown Heaven and the heart and forthcoming discs of music by Ben Parry and Joanna Marsh.
Past singers of the College include the international soloists Dame Felicity Lott, Susan Bullock, Sarah Fox and many others who now sing with ensembles including the BBC singers, The Sixteen, The Gabrieli Consort, The Tallis Scholars and Polyphony. Past organ scholars have attained prominent positions in many British cathedrals and public schools.
The choir is supported by two organ scholars, a choral administrator and full-time Director of Choral Music and College Organist, Rupert Gough.
Rupert Gough
has been director of Choral Music and College Organist at Royal Holloway, University of London since 2005. He is also Organist and Director of Music at London’s oldest surviving church, Saint Bartholomew the Great, which maintains a professional choir. At Royal Holloway Rupert has developed the choral programme to include weekly choral recitals, choral conducting courses for undergraduates, many new choral commissions and transformed the Chapel Choir into an elite group of 24 choral scholars. The Choir has particularly come to prominence through their series of recordings for Hyperion Records. Their latest recording of the music of Ola Gjeilo with Decca Classics was top of the US and UK charts over Christmas.
Rupert was a chorister at the Chapels Royal, St. James's Palace, and won a scholarship to the Purcell School. He received (with distinction) a Masters degree in English Church Music from the University of East Anglia whilst Organ Scholar at Norwich Cathedral. For 11 years he was Assistant Organist at Wells Cathedral during which time he made around 30 CD recordings as accompanist and director. Rupert has worked with a variety of professional ensembles including the BBC Singers, King’s Singers, Britten Sinfonia, London Mozart Players and Tallinn Chamber Orchestra. As an organist he has performed widely as an organ soloist and as a part of a violin and organ duo. Highlights include the Saint-Saëns Organ Symphony with the Hong Kong Philharmonic and recitals in Moscow and across the USA.