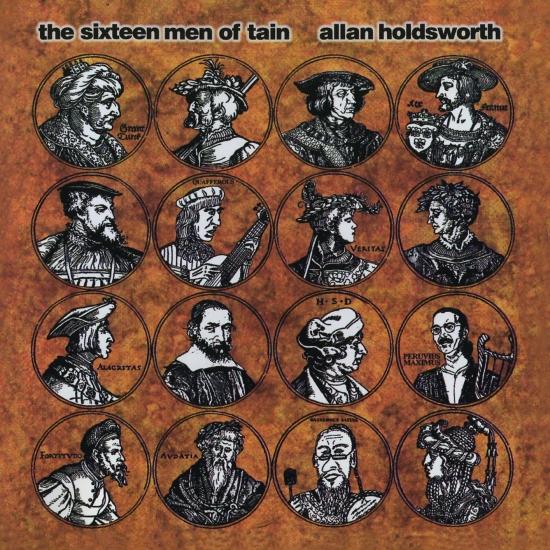 Long awaited album from the master of cubist fusion on which Holdsworth plays synthaxe as well as guitar. 8 tracks produced by Holdsworth, includes special guests Walt Fowler & Chad Wackerman. The Sixteen Men of Tain is the tenth studio album by guitarist Allan Holdsworth, released in March 2000 through Gnarly Geezer Records (United States), Polydor Records (Japan) and JMS–Cream Records (Europe); a remastered edition was reissued in 2003 through Globe Music Media Arts. The album's title is a reference to the Glenmorangie distillery in Scotland. This was the last recording to be made at Holdsworth's personal recording studio The Brewery.
"Coming on the heels of some rather mediocre efforts, The Sixteen Men of Tain is startlingly superb. Holdsworth has stripped away the distracting banks of keyboards and allowed his soaring, gliding guitar to shine through in a way it hasn't since the 1980s. Even the Synthaxe, Holdsworth's signature guitar synthesizer, sounds organic and immediate, not to mention far less prevalent than on previous albums. Dave Carpenter's acoustic bass is a radical departure (check out his solo on the title track), as are Walt Fowler's two guest appearances on trumpet. "The Drums Were Yellow," a burning guitar/drum duet tribute to the late Tony Williams, is also a first. Gary Novak's drumming is appropriately complex and riveting on this and six other tracks. (Holdsworth's old compatriot Chad Wackerman sits in for "Downside Up.") In short, this album is full of fresh ideas and unadulterated improvisational brilliance -- just when it was beginning to seem that Holdsworth's best work was behind him."
Allan Holdsworth,

None Too Soon (Remastered)

The Sixteen Men of Tain (Remastered)