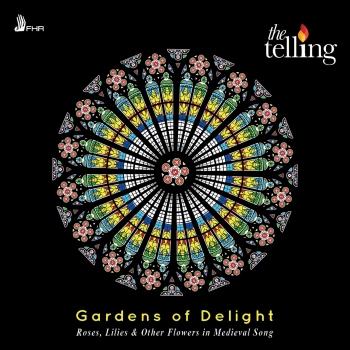 Gardens of Delight: Roses, Lilies & Other Flowers in Medieval Song 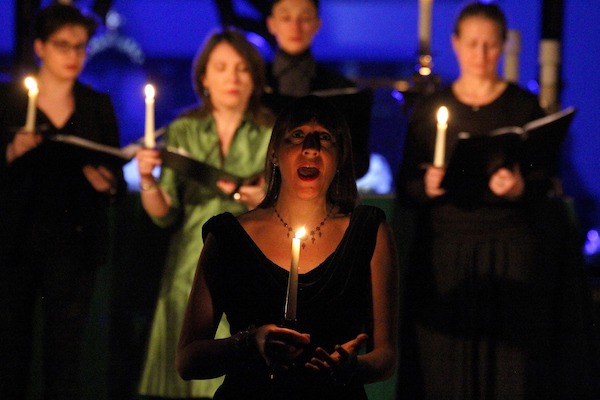 Leah Stuttard
hails from a Lancashire mill town and has played the medieval harp for almost 20 years. The first medieval music she loved was on scratchy out-of-circulation David Munrow LPs that she bought for £1 from the local library. She has worked with many major names such as Jordi Savall and her career has taken her around the world, appearing in festivals such as the York Early Music Festival, at the Southbank Centre in London, and in Rome, Madrid, Berlin, Paris, Amsterdam, New York, Los Angeles, Boston. She first started working with the Italian medieval ensemble Micrologus in 2002 and continues to add a certain British je-ne-sais-quoi to their performances. She has also appeared with Ensemble Unicorn (Austria) and La Camera delle Lacrime (France).
Her work in a duo with Agnethe Christensen (Denmark/Sweden) allows her to explore the possibilities of female voices and plucked instruments. They have already performed in Norway, Italy, Sweden, Denmark, Estonia and across the UK.
She was awarded a Leverhulme Trust Study Abroad Studentship to go to the Schola Cantorum in Basel, Switzerland where she deepened her understanding of the performance techniques and background of the early harp, spending three years there with Heidrun Rosenzweig as her tutor. She has also studied with bray harp expert, Bill Taylor. Since October 2014 she has been studying at the Sorbonne with Benjamin Bagby and Katarina Livljanic. In January 2016 she will start a PhD at Huddersfield University exploring the history of improvisation in the medieval music revival, uncovering the hidden intuitive knowledge of several generations who have devoted their time and energy to meticulously recreating this repertoire. This will be funded by the North Eastern Consortium for the Arts and Humanities.
She studied singing with Howard Milner from 1994 until his untimely death in 2011.
Clare Norburn
is a playwright and soprano. She studied music at Leeds University and London College of Music. She has sung as a soloist with many medieval ensembles including her own group The Telling, Mediva (who were finalists in the York International Young Artists Competition and selected for Southbank Centre’s Fresh Young Artists Series), Eclipse, Vox Animae, with whom she has recorded and performed medieval abbess, Hildegard of Bingen’s music drama Ordo Virtutum. She has performed throughout the country as a soloist including at The Purcell Room, The Bridgewater Hall and at leading festivals including Spitalfields Music, Brighton Festival, Newbury Spring Festival and Buxton Festival.
Since 2010 Clare has been developing a new genre of concert/plays for actor(s) with live music. This May will see the premiere of her eighth concert/play project Burying the Dead for the ensemble Ceruleo which will be performed 14 times in 2018/19.
Her Beethoven’s Quartet Journey (a cycle of 6 concert/plays to accompany a full cycle of all Beethoven’s string quartets) was developed with funding from Arts Council England with the full cycle premiered in Lympstone, Devon. It featured on Radio 4’s Today programme. Several performances will go to Bury St Edmunds, Wimbledon International Music Festival, St George’s Bristol and Tetbury Festival in 2018. Extracts were performed at the Southbank Centre’s Study Day in October.
Clare’s third concert/play, Breaking the Rules, received a 4 star review in The Guardian: “vivid and daring one man psychodrama”. It is a collaboration with vocal ensemble The Marian Consort, with actor Gerald Kyd as composer and murderer Carlo Gesualdo, directed by Nicholas Renton. It toured 17 major UK festivals/promoters in 2016 and 2017 including Cheltenham, Bath, Newbury, Brighton, Buxton and Lichfield Festivals, funded by Arts Council England and was recently performed at LSO St Luke’s. It will tour again in 2019 to Bridgewater Hall and St George’s Bristol.
She has written three shows about women (including the medieval Abbess Hildegard of Bingen) for her medieval group The Telling whose 17-date tour in 2018/19 will visit Buxton Festival, Music at Oxford, Stroud Green Festival, Omnibus Theatre (Clapham), Little Missenden Festival, Kingston Festival of the Voice, Colchester Early Music.
Together with soprano Deborah Roberts, Clare co-founded Brighton Early Music Festival. She recently stepped down after 15 years to concentrate on writing and singing.