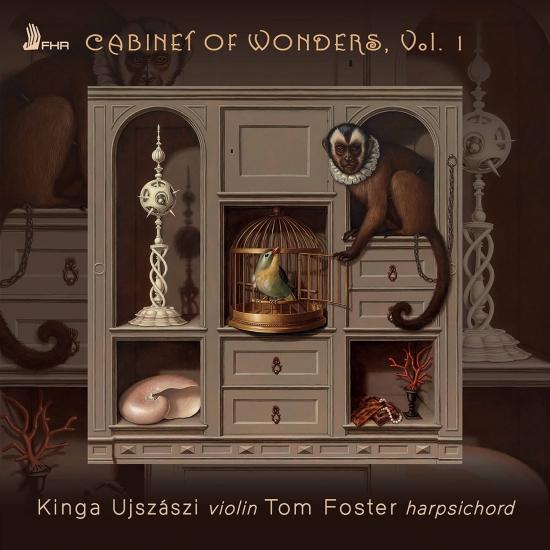 Info for Cabinet of Wonders, Vol. 1

The present recording consists of 6 fantastic, beautiful, sometimes a little bizarre, rare violin sonatas from the early 18th century and includes 3 première recordings. This release is the first of a new FHR series in which samples of the musical riches (mostly not yet published or recorded) that lie in the Dresden Schrank II collection which FHR will bring to life through new recordings. A large portion of the Schrank II manuscripts belonged to the composer/violinist Johann Georg PISENDEL (1687-1755), who whilst travelling throughout Europe, amassed a huge quantity of music, mostly manuscript. Some he bought from music shops or receive directly from composers. Most, however, he copied out himself. This collection is one of the largest and most diverse repositories of late-baroque music in the world. The Austrian Johann Joseph VILSMAYR's strange but illuminating Partita (Sonata) is a first recording, and in fact one of only two known extant sets of works by the composer, the other being the 6 Partitas also released by FHR. Alongside two gorgeous sonatas by the Italian Gasparo VISCONTI, there are three tremendous sonatas by Swiss-born Johann Freidrich SCHREIVOGEL. The only sonata not from Schrank II on this recrording, the one in E flat major, is from the Tartini Collection, also a première recording, is now featured on the ABRSM Grade VIII violin examination syllabus (2020-23). The Two brilliant musicians on this recording were chosen specifically for their incredible skills, musicianship and specialist baroque talent. Violinist Kinga Ujszászi and harpsichordist Tom Foster, both members of The English Concert baroque orchestra, give incredibly exciting and stylish performances in a wonderful crystal clear recorded sound.
"Together these artists have produced a disc which deserves to be part of every collection of baroque violin music. There is every reason to give it a special recommendation.” (Musicweb International)
“…the real stars of the Cabinet of Wonders are the artists themselves, King Ujszászi (baroque violin) and Tom Foster (harpsichord) who capture the spirit and style of these pieces and bring them to life through their wonderful playing. The continuo is always an equal partner – too often these days it is subservient. The balance and clarity of the two instruments if excellent throughout. I greatly look forward to the next volume of the Cabinet of Wonders.” (The Consort)
“This is one exciting release of show-stopping performances…. Kinga Ujszaszi’s violin playing is wonderful—creative, expressive, and moody… Tom Foster’s harpsichord accompaniments are sensitive… Kinga Ujszaszi is a talented violinist. She has full command of the technique required, but also the musical sensitivity to pull off the lyrical movements. Lovely playing” (American Record Guide)
“….Ujszászi’s playing and interpretations strike me as near ideal. The high level of technique needed to play this repertoire is still there in abundance… Tom Foster’s continuo support, on a mellow-toned copy by Keith Hill of a Taskin of 1769 tuned to unequal-temperament, is splendid…” (Early Music Review)
Kinga Ujszaszi, violin
Tom Foster, harpsichord, piano 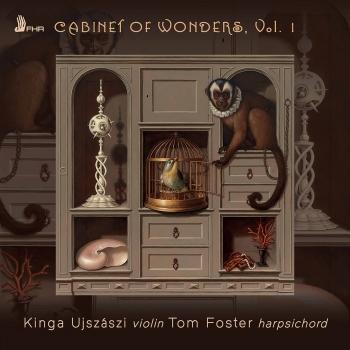 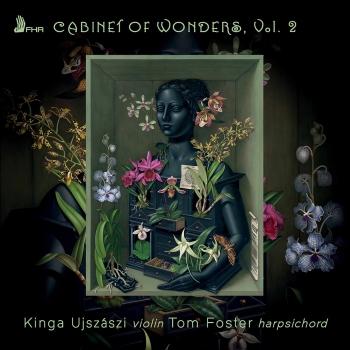 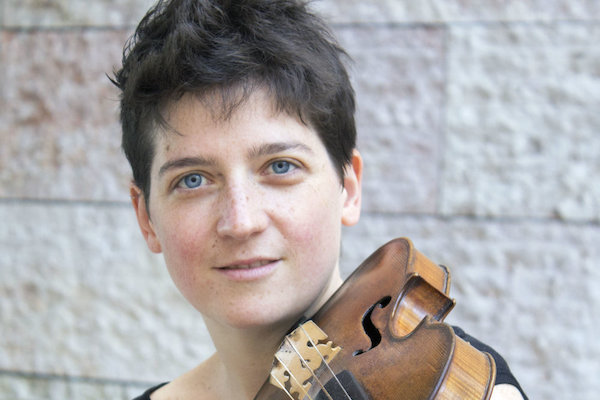 Kinga Ujszászi
Kinga moved to London to study at the Royal Academy of Music after graduating from the Franz Liszt Music Academy in Budapest. At the Academy she got interested in historical performance and picked up the baroque violin. Since then she has played with many of the leading period performance groups of England and frequently appears with The English Concert, The Academy of Ancient Music, English Baroque Soloists, the Orchestra Revolutionaire et Romantic and the Orchestra of Age of Enlightenment. She has lead numerous ensembles, including the Irish Baroque Orchestra, European Union Baroque Orchestra, Floreligium, Academia de las Luces in Madrid, Barokkbandið Brák in Reykjavik and the Intrnational Baroque Players. She is also the leader of the chamber music group Spiritato! They released two albums with Resonus Classics, Bella Dama and the first ever recording of Daniel Purcell's Judgement of Paris.
Her music making is inspired by good coffee, traveling and late night conversations. She is a big fan of dragons, mountains and mountain sport. Her most recent adventure took her to the Himalayas.

Booklet for Cabinet of Wonders, Vol. 1