Get Happy!! Elvis Costello & The Attractions 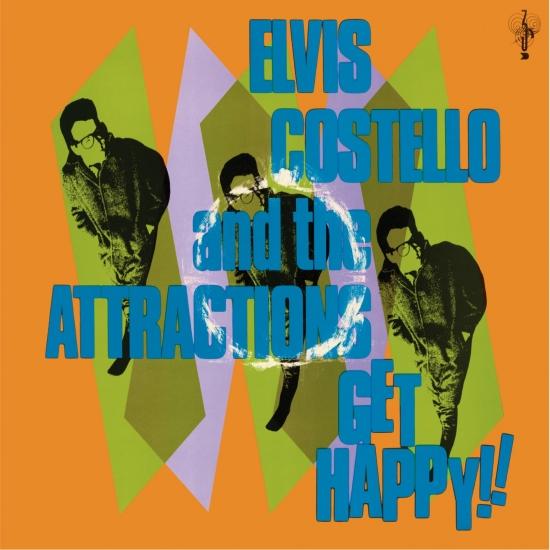 Info for Get Happy!!

With tempers and adrenalin running high from 1978's oddly-named 'Armed Funk' tour, Costello and the Attractions started work on a new album, only to find they were well and truly sick of the 'new wave' sound they found themselves playing (supposedly, hearing the Jags' Elvis-imitation single 'Back of My Hand' was the straw that broke the camel's back). A quick trip to a London record store brought them back with a stack of Booker T. and the MG's singles, and they had the direction for the new album. Taking a hint from those Stax and Motown grooves, they went back to the studio and rearranged everything on the spot, even choosing a Sam & Dave tune to cover (though they changed 'I Can't Stand Up for Falling Down' quite a bit from the original ballad version).
While the resulting album definitely has a soulful feel, the change in styles wasn't that clear-cut: Costello's melodic instincts were still running high, and many of these tunes are slammed out with a punkish fury that Booker T. and company never imagined. And the pace gets downright exhausting, with many songs clocking in at two minutes or less. 'Love for Tender', 'High Fidelity' and 'Secondary Modern' are concise little gems; 'Riot Act' is a big, dramatic ballad, and the waltz-time 'New Amsterdam,' with Costello playing every instrument, points toward the stylistic experiments on albums to come.
„Get Happy!! was born as much from sincere love for soul as it was for Elvis Costello's desire to distance himself from an unfortunate verbal faux pas where he insulted Ray Charles in an attempt to get Stephen Stills' goat. Either way, it resulted in a 20-song blue-eyed soul tour de force, where Costello doesn't just want to prove his love, he wants to prove his knowledge. So, he tries everything, starting with Motown and Northern soul, then touching on smooth uptown ballads and gritty Southern soul, even finding common ground between the two by recasting Sam & Dave's 'I Can't Stand Up (For Falling Down)' as a careening stomper. What's remarkable is that this approach dovetails with the pop carnival essayed by Armed Forces, standing as a full-fledged Costello record instead of a genre exercise. As it furiously flits through 20 songs, Costello's cynicisms, rage, humor, and misanthropic sensibility gel remarkably well. Some songs may not quite hit their targets, but that's part of the album's charm -- it moves so fast that its lesser songs rush by on the way to such full-fledged masterpieces as 'New Amsterdam,' 'High Fidelity,' and 'Riot Act.' Get Happy!! bursts with energy and invention, standing as a testament to how Costello, the pop encyclopedia, can reinvent the past in his own image.“ (Stephen Thomas Erlewine, AMG)
Elvis Costello, vocals, guitar, organ
Steve Nieve, piano, organ
Bruce Thomas, bass, harmonica
Pete Thomas, drums
Recorded October 1979
Engineered by Roger Bechirian
Produced by Nick Lowe
Digitally remastered