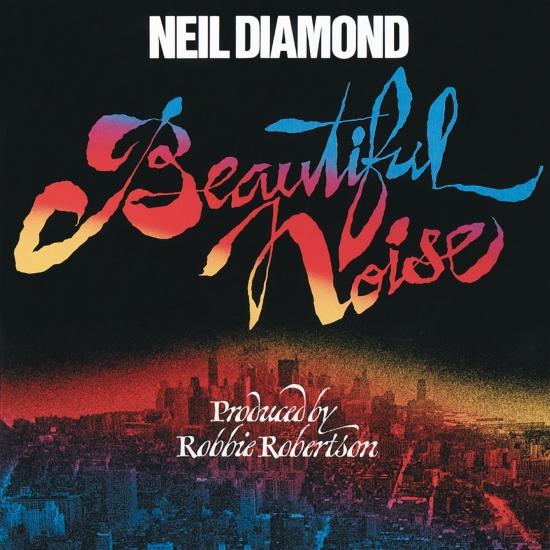 Produced by the Band's former leader Robbie Robertson, 1976's Beautiful Noise (Remastered features the cream of L.A. sessionhood, as well as New Orleans pianist Dr. John and Robertson's ex-Band mate Garth Hudson, in a set which, though it hews closely to Diamond's Tin Pan Alley roots, was the rawest the singer had sounded on record since the days of 'Cracklin' Rosie.' Songs like the gospel-tinged 'Surviving the Life' and the jazzy 'Street Life' conjure Diamond's gritty Coney Island roots, while the title track is one of the most appealing of his '70s hits.
„Beautiful Noise, Neil Diamond's 11th studio album in the ten years since he emerged with his first chart single 'Solitary Man,' announces its ambitions on its cover, which displays the skyline of Manhattan under a red horizon and a black sky, overlaid with the words 'Produced by Robbie Robertson.' Most albums, of course, do not announce the name of the producer on the front cover, but Diamond wants to let people know that Beautiful Noise is an event. That he had convinced his Malibu, CA, neighbor, the Band's guitarist and songwriter, to produce him was a surprise not only because he had worked with longtime producer Tom Catalano off and on dating back to his first solo singles session in 1963, but also because Robertson possesses the kind of rock credentials Diamond had never been granted. Further, as that ominous cover and Diamond's record sleeve epitaph ('...tin pan alley died hard, but there was always the music to keep you going') indicate, Beautiful Noise was intended as something of a concept album, the songwriter's look back at his days as a scuffling denizen of the Brill Building in the early '60s. This theme comes out immediately in the rousing title song, in which he sings of the inspiration that the city's sounds bring to him. Thereafter, the story line seems to get lost, at least in lyrical terms, but Diamond and Robertson give each track its own musical identity: 'Stargazer' employs a Dixieland arrangement, complete with wailing horns; 'Lady-Oh' is the disc's romantic ballad; 'Don't Think … Feel' has a Caribbean rhythm; 'Surviving the Life' is in gospel style; 'Street Life' has a jazz/R&B feel with a vocalese melody; 'Home Is a Wounded Heart' is the torch song; and 'Jungletime' is the rock & roll number. The heart of the album (and its leadoff single) is 'If You Know What I Mean,' in which Diamond looks back with regret and a sense of loss on his youth, 'when we gave it away for the sake of a dream/In a penny arcade, if you know what I mean.' What he seems to mean, among other things, is that his idealism was betrayed by greedy people, perhaps not a surprising sentiment for a man who, as this album was made, was still in litigation over his early recording and publishing contracts. With Robertson's help (and that of a lot of other musicians), Beautiful Noise is certainly the best-sounding and most consistently engaging album of Diamond's career up to 1976.“
Neil Diamond, vocals, acoustic guitar, rhythm guitar, dobro
Richard Bennett, guitar
Bob Boucher, bass, acoustic bass, ARP bass
Larry Knechtel, piano, Fender Rhodes
Alan Lindgren, piano, Moog, strings, synthesizer
Dennis St. John, drums, percussion
Robbie Robertson, guitar
Jesse Ed Davis, guitar
David Paich, Fender Rhodes, piano
Garth Hudson, Hammond organ, Lowrey organ
Jim Keltner, drums
Russ Kunkel, drums
Jim Gordon, drums, congas, harmony vocals
James Newton Howard, ARP synthesizer
Joe Lala, percussion, tambourine, congas
Mac Rebennack, Hammond organ
Bob James, piano, arrangements, Fender Rhodes
Tommy Morgan, harmonica
Bob Findley, trumpet
Jerome Richardson, flute, clarinet
Linda Press, backing vocals
Nick DeCaro, arrangements, accordion
Produced by Robbie Robertson
Digitally remastered