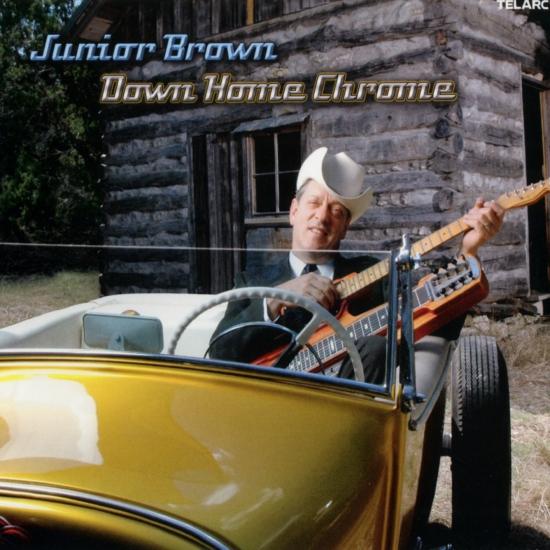 Info for Down Home Chrome (Remastered)

"Other than Junior Brown's label affiliation, little else has changed on the singer/guitarist's sixth album and first in four years. Honky tonk, rockabilly, and the rich sound of Bakersfield country are leavened with a healthy sense of humor ("Two Rons Don't Make It Right," "Where Has All the Money Gone?"), played with Brown's custom-made 12-string "guit-steel," and sung in his distinctive baritone. Side trips into lounge-ish jazz ("You Inspire Me"), hard rock ( perhaps not an entirely necessary cover of Hendrix's "Foxey Lady"), and slow blues (an album-closing ten-minute "Monkey Wrench Blues") seem like desperate attempts to show how eclectic he is. They might be live showstoppers, but just don't blend in well with the rest of the disc's more countrified approach. Much better is "Jimmy Jones," a classic, laconic, mostly spoken story-song about a brother who wanders off to his death in war. The horn-fueled jump blues swing of "Hill Country Hot Rod Man" is another diversion, but this one seems more natural and is an excellent forum for Brown's guitar pyrotechnics. A little too spotty, especially in its schizophrenic last quarter hour, the album is an adequate representation of the different styles that define Junior Brown. The pacing doesn't support his talent, making this a frustrating if somewhat enjoyable listen that is probably better appreciated after you have seen him live." (Hal Horowitz, AMG)
Junior Brown, vocals, guitar, steel guitar
Pig Robbins, piano
Yanya Rae Brown, vocals, guitar
Michael Bellew, guitar
Johnny Penner, bass
Pete Amaral, drums
Sam Levine, saxophone
Mike Haynes, trumpet
Chris Dunn, trombone
Digitally remastered 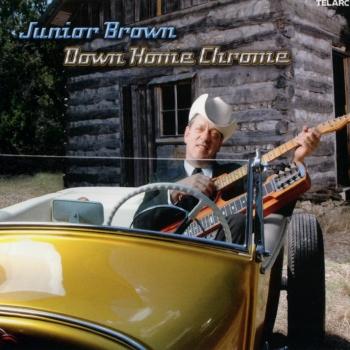 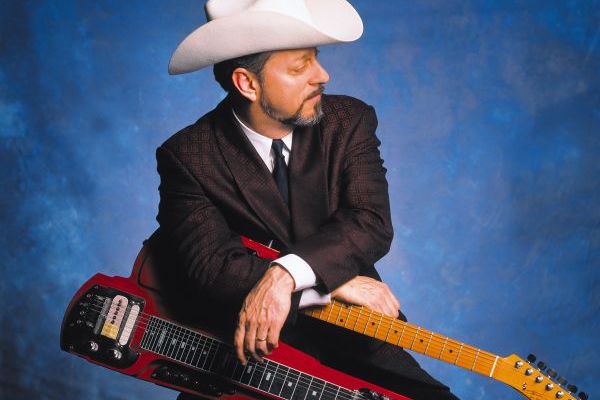 Junior Brown
A singer and demon guitarist whose raucous blend of country and rock & roll helped make him a successful crossover act, Junior Brown was born in 1952 and raised in the backwoods of Kirksville, IN. He first learned to play the piano from his father, and was exposed to country through radio and TV, becoming a fan of Ernest Tubb's music and television program. He became a professional musician at the tail end of the '60s, while still in his teens.
After honing his guitar skills in relative anonymity throughout the '70s, Brown became an instructor at the Hank Thompson School of Country Music, an affiliate of Rogers State College in Oklahoma. There, while teaching under the auspices of steel guitar legend Leon McAuliffe, a onetime member of Bob Wills & His Texas Playboys, Brown met "the lovely Miss Tanya Rae," a student whom he would later marry in 1988 and who eventually joined his band as a rhythm guitarist and backing vocalist. At the same time, a dream prompted him to set about creating an instrument fusing a six-string guitar with its steel counterpart. Contacting guitar maker Michael Stevens in 1985, he developed the "guit-steel," a double-necked guitar combining the standard instrument with the steel. (A decade later, the two men reunited to update the "guit-steel," and Brown's cherry axe, "Big Red," was born.)
After moving to Austin, TX, Brown and his group became the house band at the city's Continental Club, where strong word-of-mouth eventually earned them a record deal. He made his long-awaited album debut in 1993 with 12 Shades of Brown, which featured a tribute to his biggest influence, "My Baby Don't Dance to Nothing but Ernest Tubb." It also showcased his often-stunning instrumental work, and blended Western swing, honky tonk, and electrified Bakersfield country. Guit With It followed later in the year, and like its predecessor, was met with considerable critical acclaim. After a five-song stopgap EP, 1995's Junior High, Brown returned in 1996 with Semi-Crazy, which continued in the vein established on his previous recordings. The Long Walk Back followed two years later, and displayed a bit more rockabilly flavor. Brown issued his fifth album, Mixed Bag, in 2001. His next record, 2004's Down Home Chrome, found him on a new label (Telarc) but with the same tried and true sound. Curb released a twelve-song Greatest Hits collection in June of 2005, followed by Telarc's Live at the Continental Club: The Austin Experience later that September.