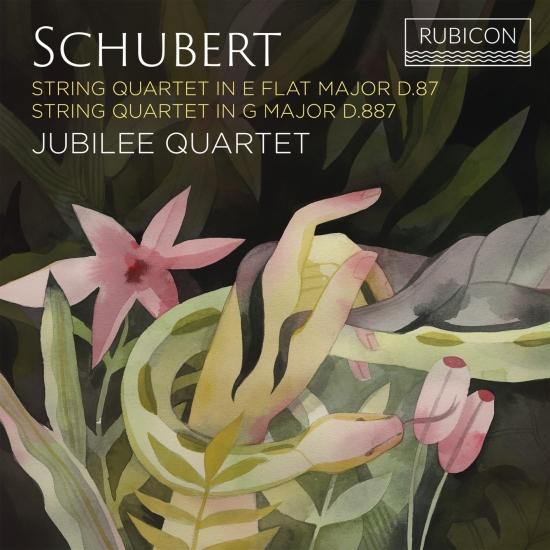 The Jubilee Quartet follow their critically acclaimed debut album of Haydn with two contrasting quartets by Schubert. The sunny and joyful D.87, his 10th quartet dates from his 16th year. Already the singing quality of the writing is apparent. The late G major quartet, the composer's 15th and final quartet dates from 1826. The emotions here are extreme - dramatic, violent, painful, menacing, introverted and innocent. Written on a large scale, this work is a groundbreaking masterpiece that stands shoulder to shoulder with the late Beethoven quartets.
‘Brilliant and distinctive… fresh and new’ is how the Telegraph described the Jubilee String Quartet’s all-Haydn debut recording. Their second album for Rubicon Classics, set for release on Friday 25 November 2022, trains the spotlight on Schubert in the shape of the composer’s youthful String Quartet No.10 in E flat major D87 and his final work in the genre, the String Quartet No.15 in G major D887.
The cosmopolitan quartet, which comprises musicians from the Czech Republic, Canada, Spain and England, will mark the launch of their new disc with a performance of the G major quartet at London’s Conway Hall, Red Lion Square on Sunday 6 November. They have programmed Schubert’s late masterwork in company with the first of Haydn’s Op.77 string quartets, the slow movement of Schubert’s String Quartet No.14 ‘Death and the Maiden’ and the song on which it is based.
The Jubilee String Quartet prepared to make their new album with a run of Schubert performances, including concerts at the Fundación Juan March in Madrid and their Wigmore Hall debut earlier this year. Their interpretations emphasise the power of the composer’s music to articulate its acute drama through rhetoric and harmony alone, without the addition of artificial extraversion from its performers. “During our preparation we grew as a quartet,” recalls the group’s founder and first violinist, Tereza Privratska. “The G major quartet in particular pushed our boundaries as performers. The best string quartet playing happens when members are not afraid to feel vulnerable in front of each other; the G major quartet prompted a new level of emotional maturity in us which we had desired but not found until working on this monumental piece.”
The Jubilee String Quartet’s decision to focus solely on Schubert grew from their immersion in the music of Haydn. Staying with the music of one composer, notes Privratska, has strengthened the bond between the quartet’s players and sharpened their musical insights. They also drew inspiration from listening to German baritone Christian Gerhaher’s natural delivery of the composer’s Lieder. The quartet plans to record a second Schubert album, which will include ‘Death and the Maiden’ and the Quartettsatz D703.
“When we were at music college we wanted to learn as many pieces by as many different composers as possible, to expand our understanding of musical styles and get a taste of each composer’s musical language. But when you switch quickly between composers, do you really get to experience a true understanding of their creative voice? After releasing our Haydn album, we felt we had really lived and loved the process of discovering his thoughts. And therefore it was clear to us we must do the same with Schubert. There’s nothing more beautiful than four people coming together and being open to such discovery.”
Just as the Jubilee String Quartet felt ‘at home’ with Haydn, their absorption in Schubert brought them closer to the personal emotions and feelings that flow through his music. The process of rehearsing, performing and recording invited the group to reflect on the striking contrasts of mood encompassed within the four movements of Schubert’s G major quartet, completed less than eighteen months before his death. The technical challenging work confronts its players and listeners with the dramatic uncertainties and ambiguities of existence.
“Have you ever had a strong need to speak about something dark while knowing that people don’t want to hear what you have to say because they would rather remain in a good mood?,” asks Tereza Privratska. “Schubert’s G major communicates the darkest moments in life in combination with the most naive and innocent form of being. As performers we always hope that our listeners are ready to open up to such a wide range of emotion within one composition. That’s what music is about, after all – communicating emotions in the most rhetorical way possible.”
Jubilee Quartet 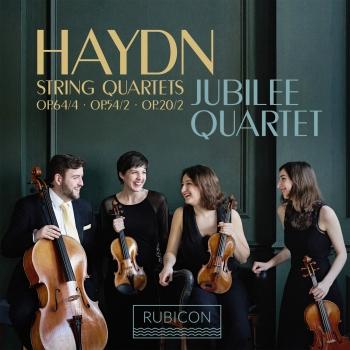 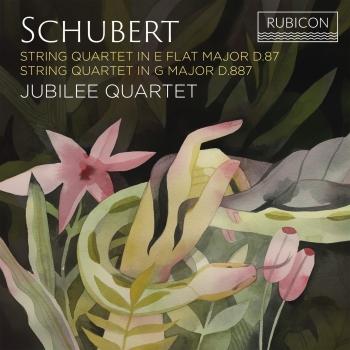 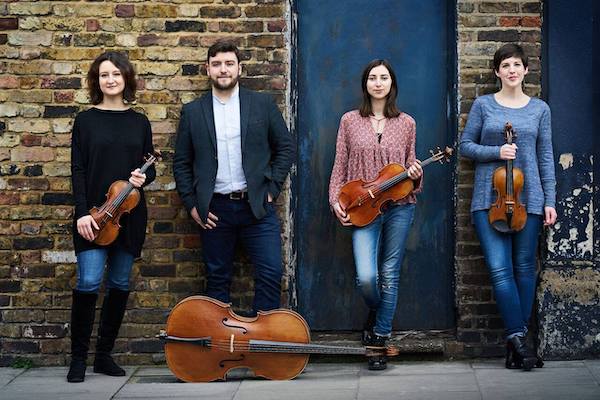 Jubilee Quartet
Originally formed in 2006 while students of the Royal Academy of Music in London, the Jubilee Quartet now exists as a collection of four musicians from across the globe. Although the group is based in London, each member brings his or her unique sense of cultural identity, and the group thrives on musical inspiration from the Czech Republic, Canada, Spain, and England. 2018 has been a thrilling and productive year, with the recording of three Haydn quartets completed for Rubicon Classics, performances and workshops with ProQuartet and ChamberStudio in London, Paris, and Roussillon, as well as the appointment of Associate String Quartet in residence at the Royal Birmingham Conservatoire.
The quartet was recently selected to perform at the prestigious International Chamber Music Festival in MonteLéon, Spain in December 2018, as well as a tour of the Southwest of England with Concerts in the West in the early summer of 2018.They have a strong connection with Basel, Switzerland, appearing in the Basel International Chamber Music series in 2017 following their studies with Rainer Schmidt, and also appeared at the Festspiele Mecklenburg-Vorpommern in 2016 in collaboration with the Doric Quartet. The quartet has performed widely throughout the UK in venues such as the Wigmore Hall, Conway Hall and the Purcell Room, and their continental tours have included a performance in the presence of the former Czech president Vaclav Havel. They have enjoyed a variety of outreach work as part of the Live Music Now! scheme, as well as working with young chamber music students at the Purcell School.
The quartet has a long history of success, including First Prize at the Val Tidone International Chamber Music Competition and the St Martin’s Chamber Music Competition, Second Prize at the Karol Szymanowski International String Quartet Competition, and Third Prize winners at the Trondheim International Chamber Music Competition. They held a Leverhulme Chamber Music Fellowship at the Academy during 2012-13, and the Richard Carne Junior Fellowship at the Trinity Laban Conservatoire of Music and Dance during 2013-14. The quartet are award winners of the Tillett Trust ‘Young Artists’ Platform’; the Park Lane Group ‘Young Artists’; the Hattori Foundation; the Worshipful Company of Musicians ‘Concordia Foundation Artists Fund’; and are recipients of the Philharmonia MMSF ‘Charles Henderson Ensemble Award’ and the Eaton Square ‘St. Peter’s Prize’.
Along with Rainer Schmidt, their studies have recently been overseen by professors such as John Myerscough through ChamberStudio and Oliver Wille at the Royal Birmingham Conservatoire. The quartet has worked extensively with Günter Pichler, Hatto Beyerle,and the Belcea String Quartet, and have participated in masterclasses with Ralph Kirshbaum, Gábor Takács-Nagy, and the Skampa, Wihan and Chilingirian Quartets.
The Jubilee Quartet would like to thank the Stradivari Trust, the Mears/Speers and Eyers families and Mike Down for their generous support.