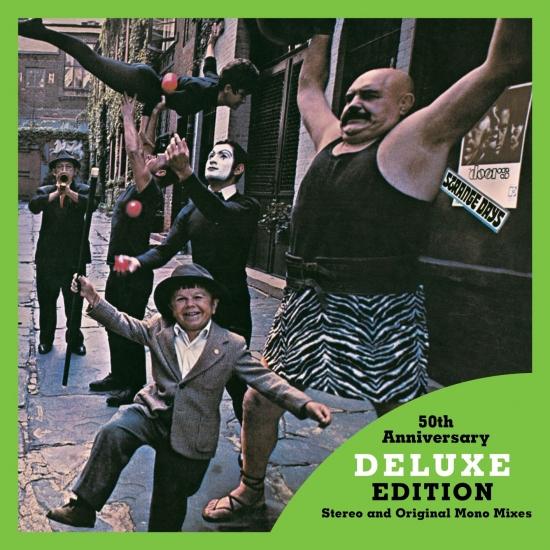 The Doors had one of the most extraordinary debut years in music history in 1967, releasing a string of hit singles and two platinum albums, beginning in January with the band’s self-titled debut, followed by Strange Days in September. The latter peaked at #3 on the Billboard album chart and featured classics like “Love Me Two Times,” “When The Music’s Over,” and the title track “Strange Days.”
For the album’s 50th anniversary, Rhino will release „Strange Days (50th Anniversary Expanded Edition)“. This double-album features stereo and original mono mixes and will be available on November 17.
„Strange Days (50th Anniversary Expanded Edition)“ was produced by the album’s original engineer Bruce Botnick. It includes the original stereo mix of the album on album for the first time in a decade, with sound that’s been remastered for the first time in 30 years. The second album features the album’s original mono mix, which has been remastered for this set and is making its debut.
The success of The Doors’ debut album – including the #1 smash “Light My Fire” – kept the band in-demand and on the road in early 1967. When Jim Morrison, John Densmore, Robby Krieger, and Ray Manzarek weren’t playing live, they recorded songs for Strange Days at Sunset Sound in Hollywood, the same studio they used to record their debut.
Having a larger budget for Strange Days allowed the band to spend more time experimenting in the studio. They used an eight-track recorder for the first time, which resulted in some memorable overdubs like Krieger’s double-tracked guitar on “When The Music’s Over.” Surprisingly, the trippy keyboard sound heard on the album’s title track is actually one of the earliest appearances of a Moog synthesizer in a rock song.
Strange Days mixed new songs written on the road with some written before the band’s 1967 debut. In fact, the band performed “Strange Days” during its 1966 residency at the London Fog in L.A., while “My Eyes Have Seen You” dates back to 1965. Another early track is “Moonlight Drive,” which was one of the very first songs that the band practiced together, and where the band heard Krieger’s haunting bottleneck guitar playing for the first time. It’s also the song Morrison sang to Manzarek at Venice Beach in 1965 when the two former UCLA film students reconnected and decided to start the Doors.
"The band's second effort isn't as consistently stunning as their debut, but is overall a very successful continuation of the themes of their classic first album." (Rolling Stone)
The Doors
Recorded May–August 1967 at Sunset Sound Recorders, Hollywood, California
Produced by Paul A. Rothchild
Digitally remastered