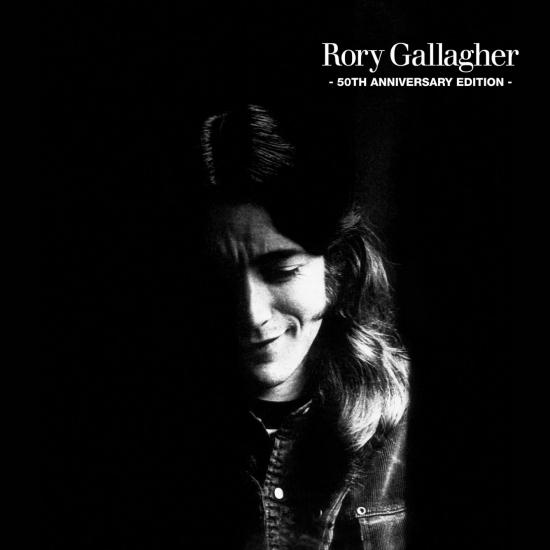 To celebrate the 50th Anniversary of Rory Gallagher’s eponymous 1971 debut solo album, UMC/UMe is pleased to announce the September 3 release of a five-album set of the album. Rory Gallagher 50th Anniversary Edition will include a brand-new mix of the original album, plus 18 previously unreleased outtakes and alternate takes, all mastered at Abbey Road Studios.
The debut album features some of the most beloved Rory songs such as “I Fall Apart” (Rory’s second most streamed song), “Laundromat” and “Just The Smile.” While reviewing numerous tapes during the 2021 mixing sessions, two songs were added to the collection: the previously unreleased “At The Bottom,” a track Rory ended up re-recording for his 1975 Against The Grain album, plus “Advision Jam,” a rocking instrumental. The recording saw Rory Gallagher on guitar and lead vocals as well as alto sax, harmonica and mandolin, Gerry McAvoy on bass and Wilgar Campbell on drums. Atomic Rooster’s Vincent Crane plays piano on two out of the 10 songs on the album “Wave Myself Goodbye” and “I’m Not Surprised.”
Rory had not played live since his previous band Taste disbanded on October 24, 1970. When Rory’s eponymous solo album was released in May 1971, he embarked on a 16-date UK tour that included 10 days touring Ireland and a short jaunt in Switzerland.
Recorded at the legendary Advision Studios in Fitzrovia, London, Rory’s eponymous debut album showcases the Irish guitarist as a multi-faceted interpreter of the blues with a cross-section of the blues from acoustic to heavy blues soul. Advision was one of the hottest recording studios in the 60s and 70s and home of classic albums recorded by The Yardbirds, The Who, The Move, T. Rex, David Bowie, Kate Bush, Elton John, Slade, Gentle Giant, Gerry Rafferty, and many more.
If ever there was a “musician’s musician” then that accolade belongs to Rory Gallagher. Renowned for his blistering live performances and highly respected for his dedication to his craft, he died in 1995, aged just 47.
Rory’s timeless reputation has continued to flourish in the years since. Indeed, some of rock’s most seminal figures, from Jimi Hendrix to Eric Clapton, Joe Satriani to Joe Bonamassa, Queen’s Brian May to The Smiths’ Johnny Marr, Slash of Guns N Roses to the Edge of U2, have cited him as an influence. Rory remains a touchstone for all would-be guitar heroes in the 21st Century.
Rory Gallagher
Digitally remastered