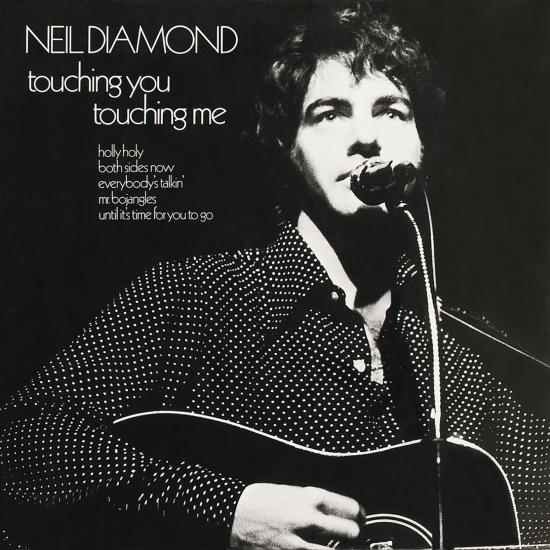 Info for Touching You, Touching Me (Remastered)

Neil Diamond's first gold album, 1969's „Touching You, Touching Me“, was also the first time the singer extensively featured other songwriters' songs, perhaps a sign of his increasing artistic confidence. In addition to the Fred Neil hit 'Everybody's Talkin'' and Buffy Sainte-Marie's 'Until It's Time For You to Go,' there's also Joni Mitchell's 'Both Sides Now' and Jerry Jeff Walker's 'Mr. Bojangles,' with Diamond's own opus, 'Holly Holy,' and his 'Smokey Lady' more than holding their own with the classy competition.
„Although the title clearly comes from the irresistible line in Sweet Caroline, Diamond’s fifth album didn’t actually include that song on its original stateside release. A hit between albums, it was belatedly tagged onto his previous offering, Brother Love’s Travelling Salvation Show, in the US. In the UK it made it into the middle of this 1969 mix of covers and originals. Why so many covers, from such a feted composer, who’d already penned iconic pop hits like I’m a Believer? Because Diamond was still proving to the world that he was no longer a Brill Building backroom boy: he was a full-blooded, theatrical performer with a stentorian voice you didn’t forget in a hurry.
So here the then-28-year-old offers thundering takes on Fred Neil’s Everybody’s Talkin’, the subversive supper-club staple Mr. Bojangles, Joni Mitchell’s Both Sides Now and Buffy Saint-Marie’s Until It’s Time for You to Go (a minor hit for Neil, later tackled by Elvis). These shine because Tom Catalano’s production and Lee Holdridge’s string arrangements allow the masculine Sturm und Drang of Diamond’s rough-tender vocals to eke every drop of sentiment from the ballads.
His own songs are as robust as ever. New York Boy – in which he explains away his long hair ('I ain’t no hippie, just a New York Boy') is rich with pop hooks, while And the Singer Sings His Song is a classic Diamond slow-burner, full of brooding grandeur. Sweet Caroline, of course, is one of the all-time great bar-room sing-alongs (as homaged in Ted Demme’s 1996 movie Beautiful Girls). Asked to explain its success, Diamond attributed its crossover appeal to the use of the A6 chord, perhaps disingenuously underestimating its basic catchiness. The follow-up hit, Holly Holy, is the album’s true centrepiece. The singer was 'trying to create or represent a religious experience between a man and a woman', but most people again just responded to the heroic build of the simple effective structure and Neil’s titanic voice, which testified – as in all the best love songs – to both joy and yearning. You’d need a gnarly heart not to be touched by Diamond’s drive here.“ (Chris Roberts, BBC Review)
Produced by Tom Catalano, Tommy Cogbill
Digitally remastered

Touching You, Touching Me (Remastered)

The Jazz Singer (Original Songs From The Motion Picture) (Remastered)