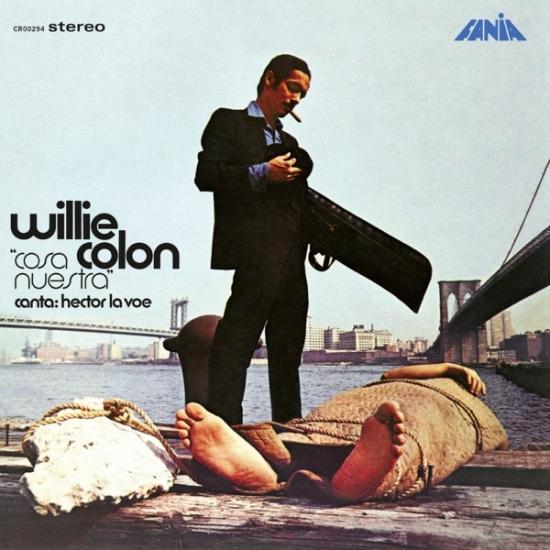 50th anniversary reissue! Powerful horns and great 'soneos', like rice and beans, are served up perfectly with this 3rd recording of the superduo Willie Colon and Hector Lavoe. The sequencing of the tracks takes the listener on a musical journey as a vast array of influences ranging from Bomba and Plena to Salsa are present. The production itself along with the vocal dominion of Lavoe make this album a must-have. Includes the perennial favorite 'Che Che Cole.'
The hegemony of Willie Colón and Héctor Lavoe in the circuit of rising youth bands in New York around the middle of the 1960s was consolidated at the end of 1969 with the launch of the album “Cosa Nuestra”.
The cover photograph, a Henri Wolfe original, recreates a typical crime scene of the mafia and the underworld: a murder which would not leave behind any traces or fingerprints because the victim’s body would be disposed of in the Hudson River with an enormous rock tied to his feet.
As the album cover designed by Izzy Sanabria is intimidating, so is the arrangement of “Che Che Colé”, a song inspired by an African children’s game that immediately captured the attention of the Spanish-speaking world for its catchy and irresistible fusion of rhythms such as the bomba and the oriza with vestiges of the African 6/8.
“Che Che Colé”, the most popular song by the Colón-Lavoe duo, opened the doors of Panama, France, Colombia, Venezuela and Peru to them. The value of Willie and Héctor substantially improved thanks to the success of “Che Che Colé” and soon we would find them competing for ‘top billing’ in the clubs of Manhattan, the Bronx and Queens with the likes of Eddie Palmieri’s La Perfecta, the Lebrón Brothers, Frankie Dante & La Flamboyán and other bands of the time.
Although in the credits of the original album the names of the musicians are not listed, according to the investigation we did for the book Cada Cabeza es un Mundo: Relatos e Historias de Héctor Lavoe, at the end of 1969 the band integrated into it Eric Matos (trombone), Little Louie Romero (timbales), Milton Cardona (congas), José Mangual Jr. (bongo and cowbell), Santi González (bass) and Professor Joe Torres, who substitutes for Mark Dimond on the piano.
In “Cosa Nuestra”, the fourth recording of the duo after the launch, early in 1969, of Guisando (Doing A Job), Colón’s band now establishes its own sound and a very particular tonic in narrative salsa, due to its emphasis on stories about life in the city. Their fame by the end of 1969 rested in a rhythm section true to and shaped for polyrhythms; in the revolutionary trombones, loud, scattered and irritating, of Colón and his partner Eric Matos; in a popular repertoire and in the refined, tasteful, sentimental vocals of Héctor Lavoe, destined to become El Cantante De Los Cantantes (Singer’s Singer) a few years later.
With the end of the era of the boogaloo and the shing-aling, Colón/Lavoe demonstrated that they had the capacity to adapt to the demands of salsa that, on the fringes of traditional Cuban music, was enriched with the bomba and other Caribbean rhythms.
In “No Me Llores Más”, Willie and Héctor’s salsa echoed the sentiment of the person who does not want any crying when s/he dies if in life s/he was not honored and respected by his/her acquaintances. In the bolero with montuno “Ausencia” they sing about the pain of the man who can not accept the departure of his beloved, whose betrayal keeps him on the verge of going crazy. In “Te Conozco” they are inspired by the type of neighborhood that most people try to avoid for fear of being robbed and in “Juana Peña” they recreate the heart-rending experience of the woman who, after betraying many men, falls in love and suffers because her love is unreciprocated.
The track sequence continues with “Sonero Mayor”, an appreciation of the art of improvisation and soneo. “Sangrigorda” links urban imagines that, from the refrain “Eh, Kiliki/saca el pañuelo/prende el tabaco/mira que voy pal suelo”, suggest the scene of a santero cleansing and that of an outburst with cannabis while in “Tú No Puedes Conmigo”, Willie and Héctor once again take up the theme of envy and betrayal of a friend, so trendy at the dawn of salsa and present in songs like Hipocresía y Falsedad, No Hay Amigo, Maldades e Indestructible, among others.
Thanks to the hits “Che Che Colé”, “Juana Peña”, “Te Conozco” and the bolero “Ausencia”, with “Cosa Nuestra” Willie and Héctor achieved the most sold LP in their then nascent record career. The Latin people eagerly awaited the next album. And with “La Gran Fuga” (“The Big Break”), released the following year, they continued their course to conquering the salsa universe.
Willie Colón, trombone, vocals
Eric Matos, trombone
Little “Louie” Romero, timbales
Milton Cardona, congas
José Mangual Jr., bongo, cowbell
Santi González, bass
Professor Joe Torres, piano
Produced by Jerry Masucci
Digitally remastered