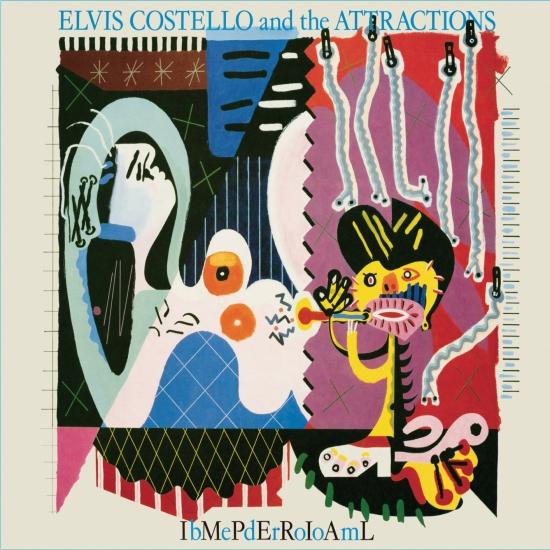 With his seventh album, „Imperial Bedroom“, Elvis Costello was hailed as being more than just a New Wave rocker. With intricate, Beatlesque arrangements and unusual, sophisticated song structures, Costello emerged as full-blown master craftsman. Some of the more excitable critics of the day declared him a modern Cole Porter. Indeed, it's possible to imagine some 1940s torch singer crooning the slinky 'The Long Honeymoon' or the mournful 'Kid About It,' but the free-associative, polyrhythmic likes of 'Beyond Belief' and 'Shabby Doll' had never been heard anywhere in pop music before.
Undeniably one of Costello's finest hours as a tunesmith, „Imperial Bedroom“ shows several sides of his musical personality. He's roots-conscious enough to pen a perfect jazz ballad ('Almost Blue,' later covered by Chet Baker), but adventurous enoug
„Having gotten country out of his system with Almost Blue, Elvis Costello returned to pop music with Imperial Bedroom -- and it was pop in the classic, Tin Pan Alley sense. Costello chose to hire Geoff Emerick, who engineered all of the Beatles' most ambitious records, to produce Imperial Bedroom, which indicates what it sounds like -- it's traditional pop with a post-Sgt. Pepper production. Essentially, the songs on Imperial Bedroom are an extension of Costello's jazz and pop infatuations on Trust. Costello's music is complex and intricate, yet it flows so smoothly, it's easy to miss the bitter, brutal lyrics. The interweaving layers of 'Beyond Belief' and the whirlwind intro are the most overtly dark sounds on the record, with most of the album given over to the orchestrated, melancholy torch songs and pop singles. Never once do Costello & the Attractions deliver a rock & roll song -- the album is all about sonic detail, from the accordion on 'The Long Honeymoon' to the lilting strings on 'Town Cryer.' Of course, the detail and the ornate arrangements immediately peg Imperial Bedroom as Costello's most ambitious album, but that doesn't mean it's his absolute masterpiece. Imperial Bedroom remains one of Costello's essential records because it is the culmination of his ambitions and desires -- it's where he proves that he can play with the big boys, both as a songwriter and a record-maker. It may not have been a commercial blockbuster, but it certainly earned the respect of legions of musicians and critics who would have previously disdained such a punk rocker. And, perhaps, that's also the reason that he abandoned this immaculately crafted style of work on his next album, Punch the Clock.“ (Stephen Thomas Erlewine, AMG)
Elvis Costello, vocals, guitar, piano
Steve Nieve, piano, organ, harpsichord, accordion, guitar
Bruce Thomas, bass
Pete Thomas, drums
Recorded 1982 at AIR Recording Studios, London
Produced by Geoff Emerick 'from an original idea by Elvis Costello'
Digitally remastered