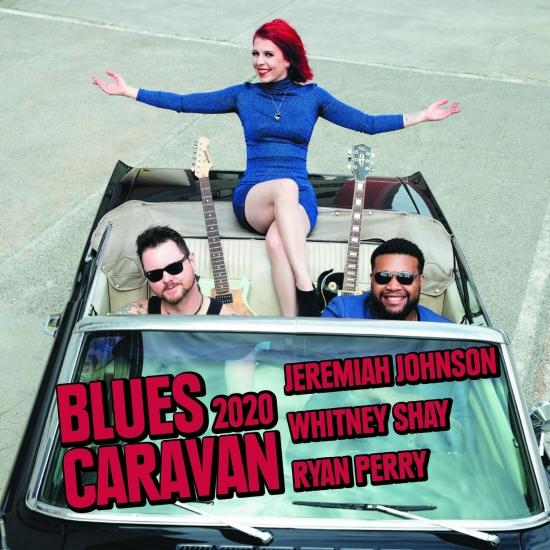 Ruf Records’ Blues Caravan is unstoppable. Fifteen years after Europe’s most respected label put on its first showcase tour, the founding concept is instantly familiar to blues fans: every night, on club stages across the US and Europe, three rising talents will burn down the house and kick the blues into the modern age. But there’s a twist. With the lineup chosen each year from the cream of the Ruf roster, every Caravan has a fresh vibe, a fizzing chemistry and plenty of flying sparks. And with three wildly different artists running the gamut of styles in 2020, all bets could have been off. But in 2020 a virus destroyed a year full of shows all over the world. Luckily before the lockdown, we recorded the show on the 18th February 2020 at the Hirsch in Nuernberg (Germany).
Jeremiah Johnson is the St. Louis bluesman from the school of hard knocks. After early days as the Southern circuit’s best- kept secret, 2018’s acclaimed Straitjacket album put the bandleader in the spotlight with its searing performances, smart hooks and blue-collar lyrics. “I am Southern blues-rock,” states Jeremiah. “It’s in my blood, my heart and my soul. I always sing my songs from my heart, with the same passion that I had when I wrote them. They come from the blood, sweat and tears of a blue-collar worker in the Midwestern United States. I couldn't be more excited about the Blues Caravan lineup – it’ll be hotter than a two-dollar pistol!”
We first met Ryan Perry as a teenage phenomenon, when he hijacked 2007’s International Blues Challenge in Memphis with his Homemade Jamz Blues Band, and announced his talent for sharp storytelling, stinging guitar and soulful vocals. This charismatic bandleader’s talents have only grown over the last decade, and following 2019’s solo debut on Ruf Records, Ryan is the finished article, armed with a setlist to raise the roof. “Fans can expect high action and low ego on the Blues Caravan,” he says. “My live shows are packed with passion and soul, always fun and full of energy – as only a Mississippi bluesman can deliver.”
There’s no mistaking Whitney Shay. When this San Diego fireball hits the stage, the first thing you’ll notice is the flammable hair and sparkling dresses. But on this year’s Blues Caravan, the singer’s show will match her style, as Whitney shakes out the R&B floor-shakers from her acclaimed A Woman Rules The World album – and gives you a sneak preview of the studio material to come. “When I perform,” she says, “I want people to dance and be engaged. To me, blues has always been about catharsis, the purging of sad experiences. If I can make the audience leave smiling and feeling like they’ve forgotten about the troubles of their day, I’ve done my job.”
Jeremiah Johnson, vocals, guitar
Whitney Shay, vocals
Ryan Perry, vocals, guitar
Roger Inniss, bass
Amanda Dal, drums 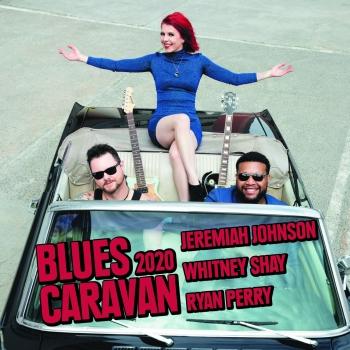 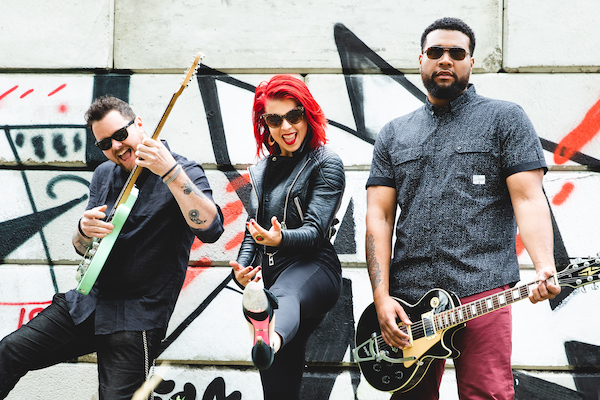 Jeremiah Johnson
Born and raised in St. Louis, Jeremiah Johnson is the voice of Mississippi River blues blending with the struggles of everyday life. He began learning guitar at age 6, drawing inspiration from his rich St. Louis blues heritage and legendary guitarists, like Alvin Lee, Eric Clapton and Hank Williams Sr. and Jr. With these influences, Johnson began building his musical foundation.
After relocating to Houston, TX, in 1999, Johnson finished in first place for three consecutive years at the Houston Regional Blues Challenges, sponsored by the Houston Blues Society. Johnson returned to St. Louis in 2009, and merged Texas style with STL blues to create the unique sound you hear today. The 10 years Johnson lived and performed in Texas changed his musical style in ways you can still hear in his music today. In 2011, Johnson was the proud winner of the St. Louis Blues Society IBC Challenge and went on to the semifinals to represent St. Louis in Memphis, TN. One year later, Sirius XM's B.B. King’s Bluesville picked up the Jeremiah Johnson Band, where they can be heard nationwide, and they have been playing his music ever since. You can also hear Jeremiah Johnson on Touch Tunes Jukeboxes in bars/clubs across the US and on radio stations around the world. In September 2014, Johnson filmed his docu-concert, Ride the Blues, directed by Australian Producer/Director Gary Glenn, at the historic Capitol Theater in downtown Burlington, IA. The film is live music video about Johnson’s rise to prominence, featuring intimate interview segments, still photography, guitar solos and stunning vocals. Donations from concert attendees were generously given to the theater and to the National Blues Museum, connecting Johnson’s roles of musician and music advocate. 2014 Johnson records Grind, produced by Devon Allman, features Grammy award winner Yonrico Scott on drums. Grind has been featured on SiriusXM's B.B. King’s Bluesville, and on the international radio show “Confessing the Blues”, broadcasting on 50 stations in 10 countries worldwide. Grind reached the #8 slot on the Billboard Blues Charts the week of November 7th, 2015.
Johnson follows the success of Grind with a self-produced release, Blues Heart Attack, released worldwide on July 22, 2016. This unique record is a blend of Johnson’s entire musical career. “It’s a combination of our earlier works, and then Grind,” he explained. “There’s horns and keyboard reminiscent of Brand Spankn’ Blues, but also some heavy guitar driven tracks. It’s the evolution of everything in a Blues Heart Attack.” Special guest performers include Tom ‘Papa’ Ray on harmonica, and Nathan Hershey on keys. Blues Heart Attack reached #5 on the Billboard Blues Charts following its release in 2016.
After signing a record deal with Ruf Records in March of 2018, Jeremiah immediately went to Texas to record his debut Ruf Records release, Straitjacket, with BMA award winning Mike Zito producing. Straitjacket debuted #1 on iTunes New Blues Releases and #6 on Billboard Blues Album Chart and has been in the top of the Roots Music Report ever since. After a European tour with Mike Zito in the Beginning of 2019 and then followed by a Northeastern USA tour with Zito again, Johnson has truly electrified a whole new audience.
Johnson released, "Heavens to Betsy", his 2nd Ruf Records Release on February 14th, 2020. Johnson started out 2020 touring with the Ruf Records Blues Caravan 2020 and separately with his band though out 2020. Then the Covid-19 Pandemic shut down the industry worldwide.
Jeremiah Johnson takes the dangers of the COVID-19 virus as seriously as his music career. But no matter how you look at it, the 2020 Covid-19 pandemic has effectively put him out of work. “Unemployed Highly Annoyed” is Johnson’s response to the adverse situation. 2020 started the year on a high note when his Ruf Records release, “Heavens to Betsy”, debuted at #3 on the Billboard Blues Album charts and soon climbed to the coveted #1 spot by April 11th. With a #1 record and 70+ European Tour dates scheduled with the “2020 Ruf Records Blues Caravan”; Johnson was set to have a breakout year before everything came to a crashing halt. Quarantined at home for months, Johnson decided it was time to get creative. “Being forced into unemployment has been beyond frustrating. I decided to produce an album of songs inspired by the “Covid-19 Pandemic” and try to turn the roller coaster of emotions into something musical. This is truly a concept album.” Johnson exclaims. The final product is a first-class Blues/Roots Rock record that is packed full of stunning guitar work coupled with soulfully passionate bluesy southern vocals. “Unemployed Highly Annoyed” is a striking musical reflection of the times that delivers a message the entire world can relate to.
Released on 10/30/2020, “Unemployed Highly Annoyed” hit #4 on the Billboard Blues Album Charts on 11/14/2020. Giving Johnson the unique honor of having to new releases in 2020 hit the top 5.
Jeremiah Johnson blends the sounds of the south, with Mississippi River blues and a touch of country flair. Emotionally charged southern blues rock, powered by the common man’s passion for life and all the struggles in-between. Songs with meaning, a powerfully persuasive voice and master class musicianship. “Unemployed Highly Annoyed” has caught lightning in a bottle with this masterful snapshot of these difficult times and is truly a testament to his talent. Possibly the best record of Johnsons career, born from the most challenging time in his life as a musician.