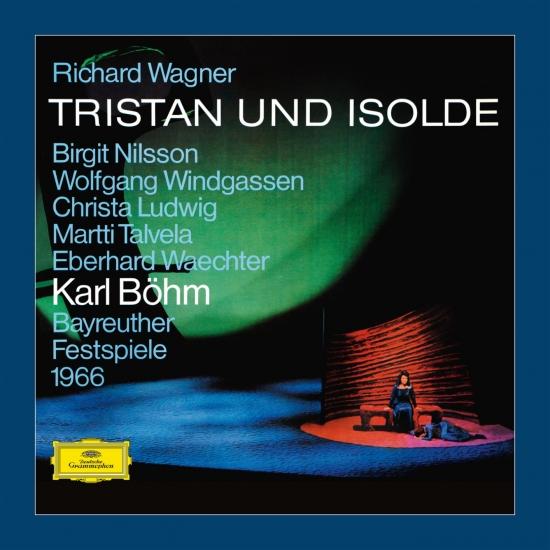 Captured live at Bayreuth, here's a Tristan that seethes with passion. Böhm is magnificent in the pit, dramatic and vital, and Windgassen and Nilsson are quite simply glorious in the title roles.
“...the performance glowes with intensity from beginning to end, carried through in the longest spans. Birgit Nilsson sings the Liebestod at the end of the long evening as though she was starting out afresh, radiant and with not a hint of tiredness, rising to an orgasmic climax and bringing a heavenly pianissimo on the final rising octave” (Penguin Guide)
“Böhm's recording is a live Bayreuth performance of distinction, for on stage are the most admired Tristan and Isolde of their time, and in the pit the 72-year-old conductor directs a performance which is unflagging in its passion and energy. He has a striking way in the Prelude and Liebestod of making the swell of passion seem like the movement of a great sea, sometimes with gentle motion, sometimes with the breaking of the mightiest of waves. Nilsson characterises strongly, and her voice with its cleavingpower can also soften beautifully. Windgassen's heroic performance in Act 3 is in some ways the crown of his achievements on record, even though the voice has dried and aged a little. Christa Ludwig is the ideal Brangäne, Waechter a suitably forthright Kurwenal and Talvela an expressive, noble-voiced Marke.
Orchestra and chorus are at their finest. Over several seasons of conducting the work at Bayreuth, Barenboim has thoroughly mastered the pacing and shaping of the score as a unified entity. Even more important, he has peered into the depths of both its construction and meaning, emerging with answers that satisfy on almost all counts, most tellingly so in the melancholic adumbration of Isolde's thoughts during her narration, in the sadly eloquent counterpoint ofbass clarinet, lower strings and cor anglais underpinning King Marke's lament, and in the searingly tense support to Tristan's second hallucination.
These are but the most salient moments in a reading that thoughtfully and unerringly reveals the inner parts of this astounding score. The obverse of this caring manner is a certain want of spontaneity, and a tendency to become a shade self-regarding. You occasionally miss the overwhelming force of Furtwängler's metaphysical account or the immediacy and excitement of Böhm's famous live Bayreuth reading. But the very mention of those conductors suggests that Barenboim can live in their world and survive the comparisons with his own perfectly valid interpretation.
Besides, he has the most gloriously spacious yet well-focused recording so far of this opera, and an orchestra not only familiar with his ways but ready to execute them in a disciplined and sensitive manner. The recording also takes account of spatial questions, in particular the placing of the horns offstage at the start of Act 2.
Salminen delivers a classic account of Marke's anguished reproaches to Tristan, his singing at once sonorous, dignified and reaching to the heart, a reading on a par with that of his fellow countryman Talvela for Böhm. Meier's Isolde is a vitally wrought, verbally alert reading, which catches much of the venom of Act 1, the visceral excitement of Act 2, the lambent utterance of the Liebestod. Nothing she does is unmusical; everything is keenly intelligent, yet possibly her tone is too narrow for the role. Lipovšek's Brangäne tends to slide and swim in an ungainly fashion, sounding at times definitely overparted.
Listening to Ludwig (Böhm) only serves to emphasise Lipovšek's deficiencies. Then it's often hard on the newer set to tell Isolde and Brangäne apart, so alike can be their timbre. As with his partner, Jerusalem sings his role with immaculate musicality; indeed, he may be the most accurate Tristan on disc where note values are concerned, one also consistently attentive to dynamics and long-breathed phrasing. On the other hand, although he puts a deal of feeling into his interpretation, he hasn't quite the intensity of utterance of either Windgassen (Böhm) or, even more, Suthaus (Furtwängler). His timbre is dry and occasionally rasping: in vocal terms alone Suthaus is in a class of his own. Yet, even with reservations about the Isolde and Tristan, this is a version that will undoubtedly hold a high place in any survey of this work, for which one performance can never hope to tell the whole story.” (Gramophone Classical Music Guide)
Wolfgang Windgassen (Tristan)
Birgit Nilsson (Isolde)
Christa Ludwig (Brangäne)
Martti Talvela (King Marke)
Eberhard Waechter (Kurwenal)
Claude Heater (Melot)
Erwin Wohlfahrt (Hirt)
Gerd Nienstedt (Steuermann)
Peter Schreier (Seemann)
Chor und Orchester der Bayreuther Festspiele
Karl Böhm, conductor
Digitally remastered 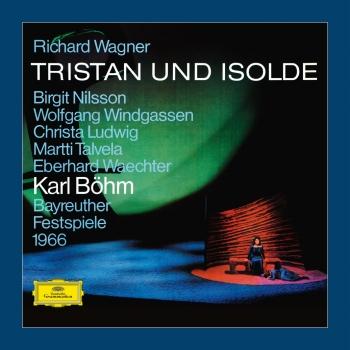