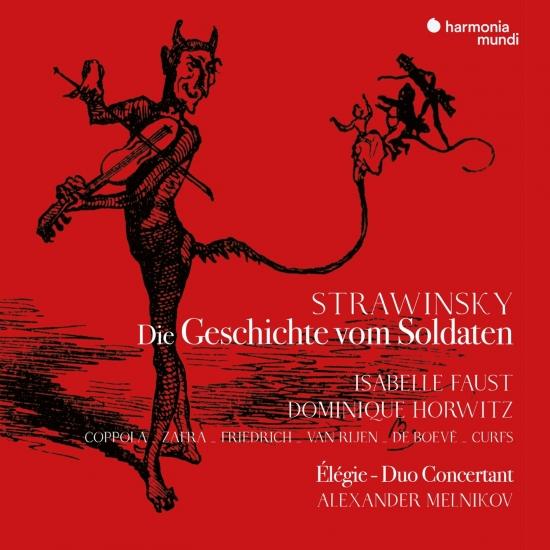 An exquisite ensemble has come together here: Genuine virtuosos equally devoted to new and old music, team players in prestigious small and large formations - the kind of ensemble you need for this piece, in which everyone is challenged soloistically and as interactor. The soul of it all is the violin, the instrument the soldier gives away for a book on how to become rich with a vow of solitude. The musical symbol is a march that guides the soldier through the story, surrounded by a variety of genres from small and large chorales to the fashionable dances of the nascent 1920s – Stravinsky was able to experience and study them first-hand in Paris. The story itself is conveyed by a narrator; it incorporates spoken lines from the protagonists. The material is taken from fairy tales, yet it fits the reality of the Great War in its final phase.
The soldier makes a deal with the devil: violin for a book of spells. This makes him rich, but nobody recognises him afterwards. When he steals the violin from a she-devil, he can no longer play it. Only after he has destroyed wealth and the book of spells does his violin playing save a princess from her melancholy. She becomes his wife. While trying to return with her to his homeland, he crosses the border agreed upon with the devil, who is already waiting for him.
The play was written for a traveling theatre, it takes up the tradition of the vagabond theatre and establishes a form that goes against the aesthetics of the grand, the overwhelming. The soldier making a pact with the devil is a man of the people, similar to the soldiers and drummer boy in Gustav Mahler’s “Wunderhornlieder”: the devilish interplay between hardship, repression and longing for the great life is drastically revealed through him.
Isabelle Faust, violin
Dominique Horwitz, recitation
Lorenzo Coppola, clarinet
Javier Zafra, bassoon
Reinhold Friedrich, trumpet
Raymond Curfs, drums
Jörgen van Rijen, trombone
Wies de Boevé, double bass 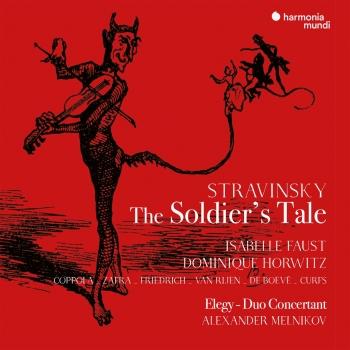 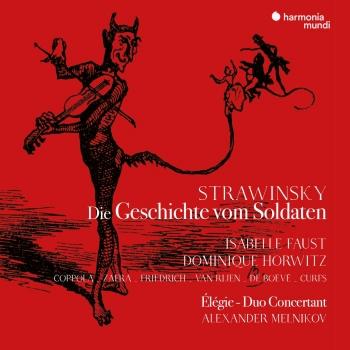 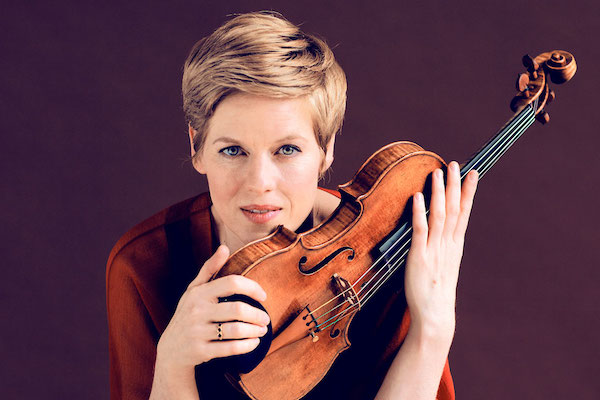 Isabelle Faust
captivates her audience with her compelling interpretations. She dives deep into every piece considering the musical historical context, historically appropriate instruments and the greatest possible authenticity according to a contemporary state of knowledge. Thus, she manages to constantly illuminate and passionately perform the repertoire of a wide variety of composers.
After winning the renowned Leopold Mozart Competition and the Paganini Competition at a very young age, she soon gave regular performances with the world’s major orchestras including the Berlin Philharmonic Orchestra, the Boston Symphony Orchestra, the NHK Symphony Orchestra Tokyo, the Chamber Orchestra of Europe and the Baroque Orchestra Freiburg.
"To fully appreciate such exquisite softness, such clarity wedded to such fragility, one needs to hear Faust live. Trust a listener who’s heard countless performances: this was Beethoven’s Violin Concerto as Cleveland rarely gets to hear it." (Zachary Lewis, cleveland.com, Februar 2020)
This led to close and sustained cooperation with conductors like Claudio Abbado, Giovanni Antonini, Frans Brüggen, Sir John Eliot Gardiner, Bernard Haitink, Daniel Harding, Philippe Herreweghe, Andris Nelsons and Robin Ticciati. Isabelle Faust’s vast artistic curosity includes all eras and forms of instrumental cooperation. Thus she never considers music as an end in itself but rather advances the piece’s essence in a devoted, subtle and conscientious way. In addition to big symphonic violin concertos this includes for instance Schubert’s octet with historical instruments as well as György Kurtág’s "Kafka Fragments" with Anna Prohaska or Igor Stravinsky’s "L’Histoire du Soldat" with Dominique Horwitz. With great commitment she renders an outstanding service to the performance of contemporary music, recent world premieres include works by Péter Eötvös, Brett Dean and Ondřej Adámek.
Numerous recordings have been unanimously praised by critics and awarded the Diapason d’or, the Grammophone Award, the Choc de l’année and other prizes. The most recent recordings include Arnold Schönberg’s violin concerto with Daniel Harding and the Swedish Radio symphony Orchestra, published in 2020, followed in 2021 by Ludwig van Beethoven’s Triple Concerto with Alexander Melnikov, Jean-Guihen Queyras, Pablo Heras-Casado and the Freiburger Barockorchester. Isabelle Faust presented further popular recordings among others of the Sonatas and Partitas for violin solo by Johann Sebastian Bach as well as violin concertos by Ludwig van Beethoven and Alban Berg under the direction of Claudio Abbado. She shares a long- standing chamber music partnership with the pianist Alexander Melnikov. Among others, joint recordings with sonatas for piano and violin by Wolfgang Amadeus Mozart, Ludwig van Beethoven and Johannes Brahms have been released.