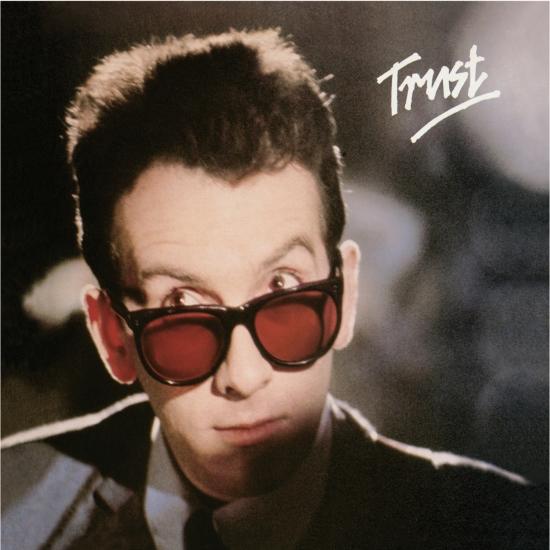 A transitional album for Costello and the Attractions, this was the last for a long while with Nick Lowe at the production helm, and the first where Costello calmed down....just a little. A couple of tunes were written back in 1976, others showed him trading the noisy intensity of old for a quieter kind of intensity. As Costello notes in the liner notes, 'The sessions were often frantic, swinging from elation to despair, for which I must take most of the blame.'
Some of the Attractions' best performances can still be heard in tracks like 'Clubland,' 'Strict Time' and 'New Lace Sleeves,' all of which turned up regularly in later live shows. The album swung from frantic rockers like 'From a Whisper to a Scream' (featuring Squeeze's Glenn Tilbrook on duet vocal) to a country song 'Different Finger,' to a slower Booker T.-type groove on 'Watch Your Step.' And the advance single 'Clubland' showed that Costello's desire to bite the hand that fed him was still intact.
„Following the frenzied pop-soul of Get Happy!!, Elvis Costello & the Attractions quickly returned to the studio and recorded Trust, their most ambitious and eclectic album to date. As if he were proving his stylistic diversity and sophistication after the concentrated genre experiment of Get Happy!!, Costello assembled Trust as a stylistic tour de force, packing the record with a wild array of material. 'Clubland' has jazzy flourishes, 'Lovers' Walk' rolls to a Bo Diddley beat, 'Luxembourg' is rockabilly redux, 'Watch Your Step' is soul-pop, 'From a Whisper to a Scream' rocks as hard as anything since This Year's Model, 'Shot with His Own Gun' is Tin Pan Alley pop, 'Different Finger' is the first country song he put on an official album, and that's not even counting highlights like 'New Lace Sleeves' and 'White Knuckles,' which essentially stick to Costello's signature pop, but offer more complex arrangements and musicianship than before. In fact, both 'complexity' and 'sophistication' are keywords to the success of Trust -- without delving into the minutely textured arrangements that would dominate his next pop album, Imperial Bedroom -- Costello & the Attractions demonstrate their musical skill and savvy by essentially sticking to the direct sound of their four-piece band. In the process, they recorded, arguably, their most impressive album, one that demonstrates all sides of Costello's songwriting and performing personality without succumbing to pretentiousness.“ (Stephen Thomas Erlewine, AMG)
Elvis Costello, vocals, guitars, all instruments on 'Big Sister's Clothes'
Steve Nieve, piano, organ
Bruce Thomas, bass
Pete Thomas, drums
Additional musicians:
Glenn Tilbrook, vocal on 'From a Whisper to a Scream'
Martin Belmont, guitar on 'From a Whisper to a Scream'
Billy Bremner, guitar on 'From a Whisper to a Scream'
Recorded October–November 1980 at DJM Studios and Eden Studios, England
Produced by Nick Lowe, Roger Bechirian
Digitally remastered