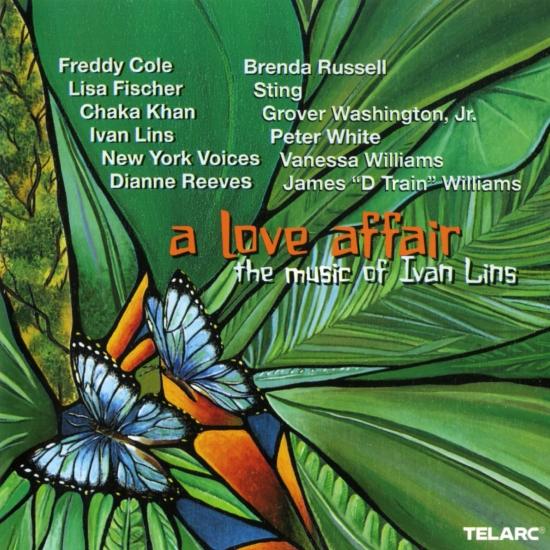 Info for A Love Affair: The Music Of Ivan Lins (Remastered)

Telarc Records recently put out a compilation disc honoring the Brazilian songwriter Ivan Lins. Titled A Love Affair, it features some of America’s biggest pop and jazz names, including Sting, Dianne Reeves, Vanessa Williams, and Chaka Khan. Producing and directing the affair is keyboardist Jason Miles, the brains behind Telarc’s recent Weather Report tribute. While the record, and Lins’s music generally, tends toward "smooth jazz" at times, many of the tracks grab you with their irresistible melodic lilt and harmonic movement. Vanessa Williams’s version of "Love Dance" is a knockout, and Dianne Reeves’s delectable "Sweet Presence" is also a keeper. Lins has a gift; that much is undeniable.
"Bring together an all-star lineup of singers and musicians, match them with accessibly romantic melodies and radio-friendly arrangements, and the results will either be lightweight pabulum or superb high-quality pop music. In the case of producer Jason Miles' A Love Affair, it's unquestionably the latter. Even after 30 years on the world music scene, Brazilian musician/composer Ivan Lins may not have had a high profile. However, as this tribute recording demonstrates, his music is as fine as anything that has come out of his native country since the bossa nova heyday of the early '60s. Taken individually, each of these songs is a piece of joyous musical exuberance. Taken as a whole, this recording is better than an hour with any radio station you're going to find on the dial or online. A Love Affair opens with the never before recorded "She Walks This Earth," a performance by Sting that is as good as anything he's recorded as a solo artist. Vanessa Williams has never sounded better than on the sultry "Love Dance," and "So Crazy for This Love" is a piece of funk featuring a multi-tracked Chaka Khan purring a deceptively complex, original, and memorable melody that also has "hit" written all over it. Grover Washington, Jr. defines smooth jazz with his ride through "Camaleao," while Freddy Cole recalls a smokier version of his brother Nat in his reading of the beautiful ballad "I'm Not Alone." Lins himself plays piano on several tracks and closes the album with a vocal of his own on "Somos Todos Iquais Nesta Noite." Kudos go to producer Miles for bringing this remarkable assemblage together, and a special mention is due to guitarist Romero Lubambo and percussionist Cyro Baptista, whose work throughout the recording is exemplary." (Jim Newsom, AMG)