My Aim Is True Elvis Costello & The Attractions 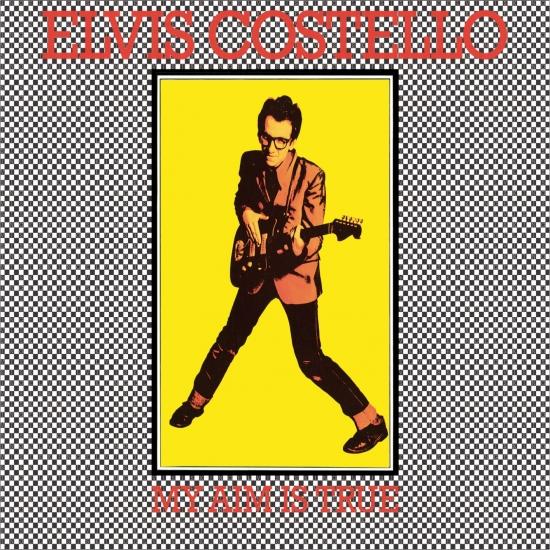 Info for My Aim Is True

When „My Aim Is True“ was released in 1977, no one knew that the character on the cover, with coke-bottle glasses, ill-fitting clothes, and Jerry Lewis posture would become a pop-culture icon. Elvis Costello arrived as the uber-geek, hell-bent on blowing away years of macho rock posturing with his revenge-of-the-nerds image and sharp, snappy sound, instantly defining New Wave. In retrospect, the songs--with echoes of everything from the Band ('Blame It on Cain') to the Byrds ('[The Angels Wanna Wear My] Red Shoes')--owed more to rootsy pub-rock than it did to punk, but it was still miles beyond the hairy-chested blues-rock theatrics bogging down the airwaves in the mid-'70s.
While Elvis hadn't hooked up with the Attractions yet, he's ably backed on most of the album by Californian pub-rockers Clover (who would eventually become--shhh--Huey Lewis & the News), and crucially, on the white-reggae 'Watching the Detectives,' by Steve Goulding and Andrew Bodnar, on loan from key Costello influence Graham Parker. None of this would have mattered had Costello's melodic knack not been so crafty and his lyrics so trenchant, immediately establishing him as the premier singer/songwriter of the post-hippie era.
„Elvis Costello was as much a pub rocker as he was a punk rocker and nowhere is that more evident than on his debut, My Aim Is True. It's not just that Clover, a San Franciscan rock outfit led by Huey Lewis (absent here), back him here, not the Attractions; it's that his sensibility is borrowed from the pile-driving rock & roll and folksy introspection of pub rockers like Brinsley Schwarz, adding touches of cult singer/songwriters like Randy Newman and David Ackles. Then, there's the infusion of pure nastiness and cynical humor, which is pure Costello. That blend of classicist sensibilities and cleverness make this collection of shiny roots rock a punk record -- it informs his nervy performances and his prickly songs. Of all classic punk debuts, this remains perhaps the most idiosyncratic because it's not cathartic in sound, only in spirit. Which, of course, meant that it could play to a broader audience, and Linda Ronstadt did indeed cover the standout ballad 'Alison.' Still, there's no mistaking this for anything other than a punk record, and it's a terrific one at that, since even if he buries his singer/songwriter inclinations, they shine through as brightly as his cheerfully mean humor and immense musical skill; he sounds as comfortable with a '50s knockoff like 'No Dancing' as he does on the reggae-inflected 'Less Than Zero.' Costello went on to more ambitious territory fairly quickly, but My Aim Is True is a phenomenal debut, capturing a songwriter and musician whose words were as rich and clever as his music.“ (Stephen Thomas Erlewine, AMG)
Elvis Costello, vocals, guitar, piano and drumsticks (on 'Mystery Dance“)
John McFee, lead guitar, pedal steel guitar, backing vocals
Sean Hopper, piano, organ, backing vocals
Johnny Ciambotti, bass, backing vocals
Mickey Shine, drums
Stan Shaw, organ (on 'Less Than Zero“)
Nick Lowe, backing vocals, piano, drumsticks and bass (on 'Mystery Dance“)
Andrew Bodnar, bass (on 'Watching the Detectives“)
Steve Goulding, drums (on 'Watching the Detectives“)
Steve Nieve, organ and piano overdubs (on 'Watching the Detectives“)
Recorded 1976–1977 at Pathway Studios, London
Produced by Nick Lowe
Digitally remastered
Ranked #168 in Rolling Stone's 'The 500 Greatest Albums Of All Time'