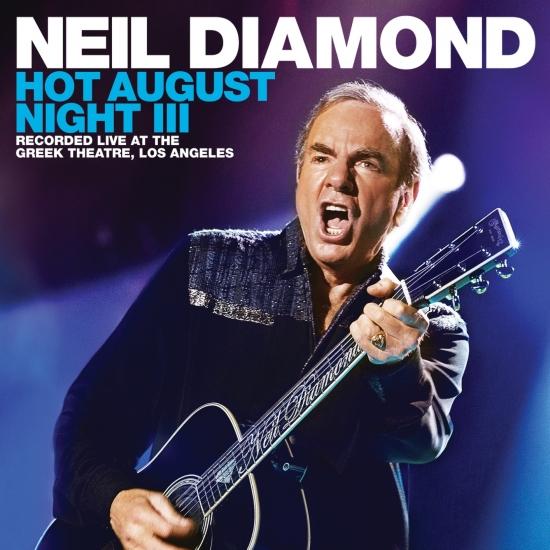 The triumphant return by Neil Diamond to the Greek Theatre in Los Angeles in August 2012 will be marked by Capitol/UMe’s 17 August release of the live concert set Hot August Night III. The show marked Diamond‘s 40th anniversary celebration of the original multi-platinum-Hot August Night album, recorded in the same location in 1972.
The new release will feature 33 songs, 31 of which number among the greatest hits of the storied American entertainer. Hot August Night III runs over two hours and 20 minutes. Hot August Night Ill chronicles the iconic singer-songwriter's triumphant return to the legendary Greek Theatre in Los Angeles, California, in August of 2012. That evening marked the 40th anniversary of his multi-platinum-selling Hot August Night album, which he recorded at that same venue back in 1972.
His 2012 concerts at The Greek Theatre in Los Angeles earned glowing reviews from music critics, including Billboard Magazine. Hot August Night Ill is a collection that cements his mastery of the live stage and his unique connection with audiences all over the world.
“His voice remains powerful and accurate,” wrote Billboard of Diamond’s 2012 show. “He reaches towards the baritone register for emphasis, just as he did in the ’70s…he never falters in delivering every line with conviction.” The album features such career songs as ‘Sweet Caroline,’ ‘Cracklin’ Rosie,’ ‘I Am…I Said,’ ‘Forever In Blue Jeans’ and ‘You Don’t Bring Me Flowers.’
Diamond has worldwide album sales estimated at 130 million, with 38 top 40 US hits and 16 top top ten albums. The original Hot August Night was a landmark release in his progression to becoming one of the premium songwriters and performers of the past 50 years. It entered the US charts in December 1972 and reached No. 5 during an epic 78-week chart stay. Hot August Night II was released in 1987 and became another of Diamond’s platinum-selling albums.