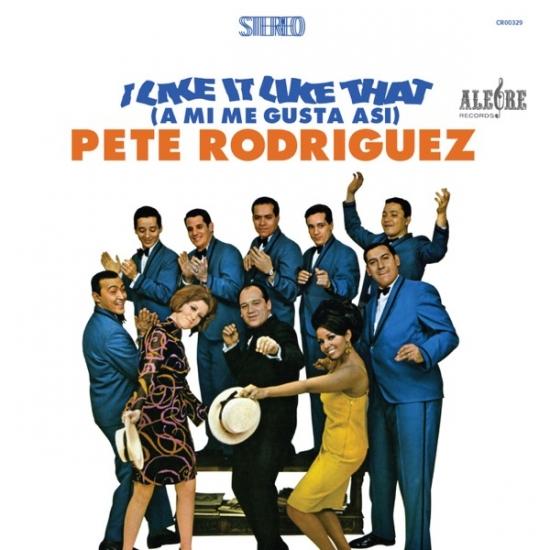 The album that defined the Latin boogaloo sound by Bronx-born, Puerto Rican bandleader and pianist Pete Rodriguez, known as "The King of Boogaloo."
Released by Alegre Records in 1967, this was the fifth album by pianist and bandleader Pete Rodriguez. Marking the heyday of the boogaloo movement in New York, the title track became the genre’s anthem and one of the most iconic dance hits in the history of Latin American music. ‘I Like It Like That’ was sampled and served as the basis for the global mega-hit ‘I Like It,’ released in 2018 by Cardi B with Bad Bunny and J Balvin.
Set for release on 31 July and offering seven tracks brimming with Afro-Caribbean flavor, I Like It Like That is ideal for a deep listening experience on vinyl. From the irresistible groove of the title track and the jazzy urgency of the instrumental ‘Pete’s Madness’ to Rodriguez’ gorgeous piano solo on ‘El Hueso’ and the reckless danceability of ‘Micaela,’ this is an album that goes beyond the confines of boogaloo, delving into Latin jazz, salsa and cha cha cha.
This new edition of I Like It Like That boasts all-analog mastering from the original tapes by Kevin Gray at Cohearent Audio. The 180-gram vinyl has been manufactured at Memphis Record Pressing. The reissue will be accompanied by a brand-new music video featuring archival footage from the New York Latin music scene in the ’60s. On 19 June, Craft Latino will also release a remix by DJ Uproot Andy, which updates the original’s timeless mystique through the use of electronica and tribal beats.
"There's a reason they called him Mr. Boogaloo, and that other Pete Rodriguez (not "El Conde") works through both swinging boogaloo and well-played salsa on his first LP, I Like It Like That (A Mi Me Gusta Asi). The title track works the boogaloo format pretty well, but Rodriguez really shines on quasi-instrumental workouts like "Pete's Madness" and the live-sounding "Micaela." (John Bush, AMG)
Pete Rodríguez
Digitally remastered by Kevin Gray at Cohearent Audio