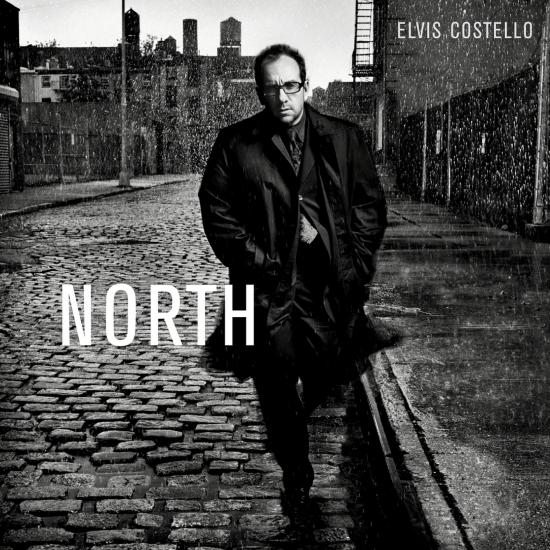 Few artists in pop history have displayed as many different musical sides as Elvis Costello. Over the years, he's ventured in new wave, country, jazz, R&B, and more, and collaborated with everyone from Burt Bacharach to opera star Anne Sofie Von Otter. So those who've followed his twists and turns shouldn't be taken aback by EC following his excellent, groove-based rock album WHEN I WAS CRUEL with a disc full of gently orchestrated piano ballads.
This is Costello's debut release on the classical Deutsche Grammaphon label, and though he's ventured into the classical world on such projects as his „Juliet Letters“ album with the Brodsky Quartet, this is a different beast. With a muted backing that splits the difference between jazzy combo and modern orchestra, „North“ finds Costello aiming for a modern variation on the classic standard format. Using traditional structures, he spices things up by adding seemingly Schubert-inspired art song-like harmonies and melodic intervals. The lyrics follow a man on the path from romantic disillusionment to the sparks of a new love, mirroring the songwriter's personal journey at the time of the recording. The only question at the end is--where to next?
„Everything about this performance was exquisitely measured, from the stark lighting to the melancholy but never indulgent tone. With theses songs, he has come close to tapping into the timelessness of maestros such as Burt Bacharach . . .“ (Fiona Shepherd, Scotsman)
„The songs were all beautifully arranged, with classical flourishes from Steve Nieve on the piano and the Brodsky Quartet, but most revealing were the dialogues... This ["North"] is among his most emotionally honest, using sparse piano and his own hushed baritone vocals... "Someone Took The Words Away" and "Fallen" sounded particularly fine, with the latter being perhaps the most romantic song ever written in Oldham.“ (Richard Milne, Financial Times, UK)
„Elvis Costello's new album, "North," will put an end to the faux post-modern cliché that nobody writes good pop songs anymore... Costello spent more than a year writing the songs for "North," and he has taken the time and made the effort to learn how to write the arrangements for the chamber orchestra backing him. He conducts the orchestra, and his piano accompaniment is better than it needs to be. A good bet for a Grammy.“ (Mike Zwerin, International Herald Tribune, UK)
Elvis Costello, vocals, piano, guitar
Steve Nieve, piano
Michael Formanek, bass
Brad Jones, bass
Peter Erskine, drums
Bill Ware, vibraphone
Recorded April-May 2003, Nola Studios and/or Avatar Studios, New York
Engineered by Jon Bailey, Kevin Killen, Peter Doris
Produced by Elvis Costello, Kevin Killen