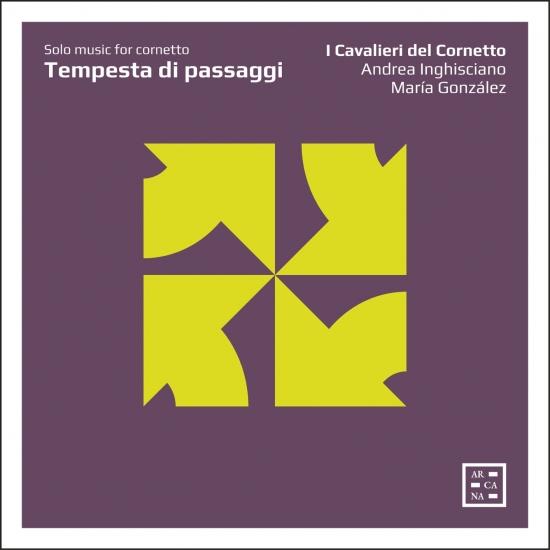 A storm of passaggi to echo the virtuosity of the cornettists of Renaissance Italy who exalted their instrument, of which Andrea Inghisciano is one of the most sought-after contemporary exponents (listen, for example, to the disc ‘La Morte della Ragione’ with Il Giardino Armonico). Here, along with the keyboard player María González, he presents a programme bursting with diminutions, whether written or improvised: from the acrobatics of Francesco Rognoni and Dario Castello to the sweetness of Luzzasco Luzzaschi and Giovanni Battista Bovicelli, by way of Girolamo Dalla Casa, who, while recommending performers to ‘do few things, but do them well’, amazes us with his exuberant writing, with rapid cascades of notes as arduous to play as they are fascinating to listen to. This duo recital is the recording debut of the ensemble I Cavalieri del Cornetto, which aims to explore the art of diminution in all its forms.
I Cavalieri del Cornetto
Andrea Inghisciano, cornet
María González, soprano 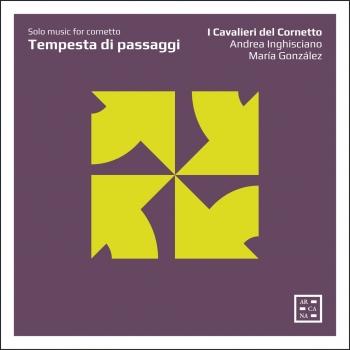 I Cavalieri del Cornetto
The Tuscany based ensemble I Cavalieri del Cornetto was founded by Andrea Inghisciano with the aim of exploring mainly the music of the 16th and 17th century. Despite the constant presence of cornetto, the group is extremely versatile and can include all sorts of instruments and voices. Sharing their passion for the art of improvisation, the musicians of the group donate a special vitality and freedom during the performances.
Andrea Inghisciano
After his studies in trumpet and jazz at the Istituto Musicale “P.Mascagni” in Livorno with Marco Nesi and Mauro Grossi, Andrea Inghisciano turns to the cornetto and obtains the Master in Performance of Ancient Music at the Schola Cantorum Basiliensis under the guidance of Bruce Dickey.
He leads his ensemble I Cavalieri del Cornetto and beyond the concert activity he is also a cornetto maker.
He performs with ensembles such as Il Giardino Armonico, Concerto Italiano, Accademia Bizantina, La Venexiana, Concerto Romano, Ensemble Daimonion, I Barocchisti, Freiburger Barockorchester, Collegium Vocale Gent, The English Cornett & Sackbut Ensemble, Nederlandse Bachvereniging, La Pifarescha, Helsinki Baroque Orchestra, Ensemble Claudiana, Academy of Ancient Music, La Reverdie, Anthonello, Cantar Lontano, Wroclaw Baroque Orchestra, Il Gusto Barocco, Les Talens Lyriques, La Cetra Barockorchester Basel, Odhecaton and others.
He recorded for Archiv Produktion, Alpha, Arcana, Naive, Emi, O-live music, Glossa, Concerto classics, Ricercar, Decca, Tactus, Brilliant, Et’Cetera, Arts, Christophorus, Amadeus.