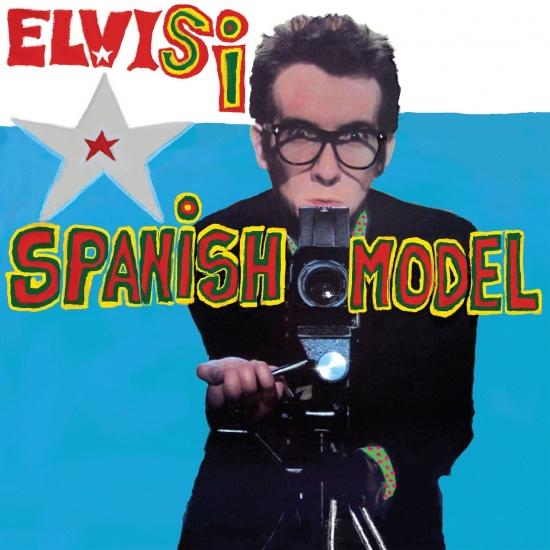 Elvis Costello and award-winning producer, Sebastian Krys, have brought together a stunning international cast of some of the biggest Latin rock and pop artists from around the globe to interpret Elvis Costello and The Attractions’ album, This Year’s Model, entirely in Spanish. Spanish Model features such artists as: Cami, Draco Rosa, Fito Páez, Francisca Valenzuela & Luis Humberto Navejas (lead singer of Enjambre), Gian Marco & Nicole Zignago, Jesse & Joy, Jorge Drexler, Juanes, La Marisoul, Luis Fonsi, Morat, Nina Diaz, Pablo López, Raquel Sofía & Fuego, Sebastián Yatra, and Vega. The inspired Spanish-language adaptations are set to the band’s classic studio performances, culled from the original master recordings, which have been newly mixed by Krys.
“We are thrilled to have worked with Elvis Costello in developing six visual content shorts that tell the story of how and why This Year’s Model becomes Spanish Model,” Jose Tillan said. “This is such a unique and completely new concept, which made the process of storytelling both challenging and adventurous. It is amazing how the DNA of the original album – both the music and themes – totally resonate with Spanish speaking artists and audiences.”
“I love the humour and heart that Jose has caught in this film,” Elvis Costello said. “It’s been great to hear all these voices and see the faces of our new friends. The whole gang’s here. One last time with feeling.”
Conceived by Elvis Costello and longtime collaborator, 18-time GRAMMY® and Latin GRAMMY® award-winning producer, Sebastian Krys, Spanish Model is a daring, first of its kind record. The songs of This Year’s Model have been expertly translated and adapted into Spanish to retain their meaning, energy, attitude, and wit. The concept represents what may be a first: an artist replacing their vocals with newly recorded performances by other artists singing in another language, backed by the original music.
As Costello and Krys began to think of artists that would be a good fit, they discovered that This Year’s Model was an important record to many artists in the pan-Latin world, but its true nature had never been fully appreciated because of the language barrier. They enlisted many Costello fans, a few who Krys and Costello felt would be a great fit for the song, and all of whom have stellar careers and were excited to participate and bring their own styles to the immediacy and poignancy of the original songs, helping to create an entirely new listening experience.
Spanish Model exudes the same kind of energy and spirit as the original but with a Latin twist. With 19 featured artists representing 10 countries and territories across the Spanish-speaking world including: Argentina, Chile, Colombia, Dominican Republic, Mexico, Peru, Puerto Rico, Spain, Uruguay, plus several from the United States. The album is truly a global, collaborative affair. Costello’s spiky guitars collide with band mates Steve Nieve’s carnival-esque keys and the urgent, propulsive rhythms of bassist Bruce Thomas and drummer Pete Thomas, as The Attractions virtually back a host of Latin music legends, contemporary stars and burgeoning artists for a set of thrilling Spanish-language performances imbued with each artist’s singular identity and style.
"On the face of it, Spanish Model seems destined to be a curiosity: it features the original Attractions backing tracks from Elvis Costello's classic 1978 album This Year's Model with new vocal overdubs by contemporary Latin artists. Costello came up with the idea after revisiting the original session tapes for This Year's Model in 2018 -- he and his co-producer Sebastian Krys were turning "This Year's Girl" into a duet featuring Natalie Bergman -- and finding the band sounded powerful in their own right with his lead vocals stripped away. He soon came up with the idea of recording a Spanish-language version of the album, recruiting musicians from around the globe -- including Juanes, Nina Diaz, Jesse & Joy, Luis Fonsi, Fito Páez, and La Marisoul -- to help translate and shape the original material into something fresh. Far from being an intellectual exercise, the resulting Spanish Model retains the vigor of the Attractions yet sounds brighter and openhearted in the hands of Latin singers. Some of the change in tenor is certainly due to the absence of a vitriolic young Costello. Back in 1978, he sang in a furious rush, spitting out insults and paranoia. The singers here take their time with the melody and the words, a shift that helps pull the compositions into sharp relief; they sound more pop and less punk in this incarnation. Even if the melodies feel more pronounced on Spanish Model, the barbed humor and spiky politics remain -- "Night Rally," performed here by Jorge Drexler, sounds prescient about 21st century fascism -- and the decision to widen the net to include such non-LP songs as "Big Tears," "Radio, Radio," "Crawling to the USA," and "Running Out of Angels" (all included as bonus cuts on subsequent reissues; "Radio Radio" was on the original U.S. version of the LP) helps broaden the musical and emotional palette of the album. The end result winds up not as a curiosity but rather a small wonder, revealing new dimensions of the original recording while opening up these songs for new audiences." (Stephen Thomas Erlewine, AMG)
Elvis Costello & The Attractions