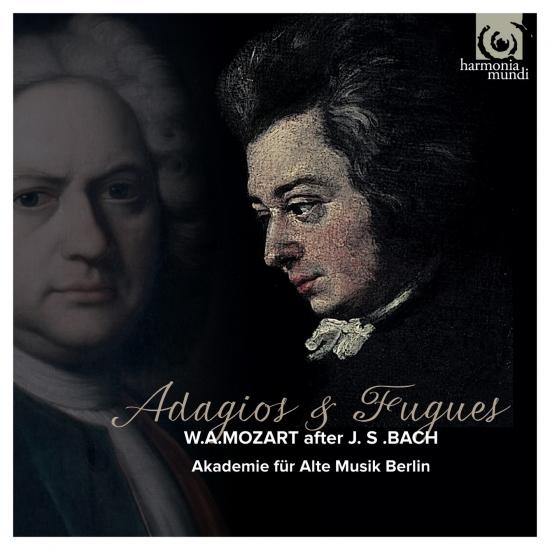 It has often been overlooked that, between Bach’s death (1750) and the triumphant revival of his 'St Matthew Passion' by Mendelssohn in 1829, other composers had already investigated the oeuvre of this ‘old master’. Mozart was the most fervent among them; thanks to the discoveries of Baron van Swieten, he had the opportunity to explore 'The Well-Tempered Clavier' and make the string arrangements from it featured on this disc.
Akademie für Alte Musik Berlin add to their extensive Bach discography with Stephan Mai as konzertmeister. His note on the scoring explains that 'In K426, K426a, and K546 we follow Mozart’s own indications as to scoring. The other study works that have come down to us in manuscript scores (for string quartet) offer scope for instrumentation in different textures: string orchestra, string quartet, wind alone, and a combination of strings and wind, as in the last work on the programme, serve the dramaturgical conception of this album and follow no particular principle apart from that of feasibility.
It goes without saying that the contrapuntal unfolding of the lines in J. S. Bach’s fugues was not to be altered for the sake of the instrumentation, for example by redistributing the voices.'
„Make no mistake, this is a lovely disc. It would be both interesting and enjoyable to hear arrangements of Bach fugues dating from the turn of the 19th century, although that is not quite what we are getting on this program. Mozart made five such arrangements, for string quartet (K. 405), and was evidently inspired to compose his own such works, the Fugue for Two Keyboards K. 426 and the famous Adagio and Fugue in C minor K. 546, both of which are included here.
As for the rest, it is deceptive to describe any of this as “by Mozart”, or indeed as having much if anything to do with him at all. In the first place, the preludes that precede the fugues are neither by Bach nor by Mozart, but are rather the work of various anonymous arrangers whose efforts were documented in certain manuscript sources used as the basis for this particular recording. Second, the Akademie für Alte Musik Berlin has re-scored the three pieces included here from K.405 that Mozart did arrange. This makes for a more attractive and ear-catching program for continuous listening, unquestionably, but it effectively de-Mozartifies K. 405.
So what we are left with is a 51-minute CD containing approximately 10 minutes of authentic Mozart, followed by various wholly modern Bach arrangements having little to do with Mozart save for the fact that once upon a time he did something similar that is not contained on this alleged “Mozart does Bach” CD. I have no hesitation in recommending this disc for what it is–excellently played and recorded arrangements of Bach on period instruments, made especially for this project, plus two possibly Bach-inspired works by Mozart. Don’t believe that it contains anything else.“ (David Hurwitz, Classical Today)
Die Akademie für Alte Musik Berlin