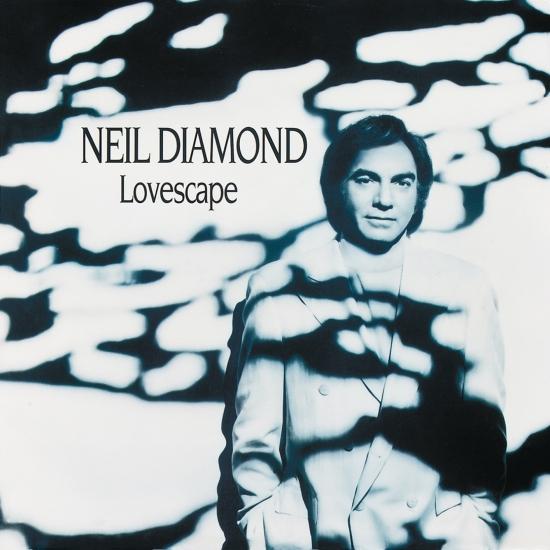 Something of a concept album about love (although a Neil Diamond album that didn't center on the subject of love wouldn't be much of a Neil Diamond album at all), „Lovescape“ uses a variety of producers, like Diamond's fellow singer-songwriter Albert Hammond, the talented Don Was, and Diamond himself, to craft its multi-faceted message. Love is found ("Someone Who Believes in You"), treasured ("All I Really Need Is You"), and lost ("Hooked on the Memory of You"), over the course of this 15-song cycle. „Lovescape“ features some of Diamond's most impassioned performances on songs like the Was-produced "Wish Everything Was All right," and a sensitively realized version of Stephen Sondheim and Leonard Bernstein's "One Hand, One Heart," from WEST SIDE STORY.
„Lovescape frames Neil Diamond's typically strong, if a little over-dramatic, vocal style with plinking keyboards, cooing backup singers, and hissing, breathy synthesizers. It's all drenched in the kind of reverb that screams "lite rock radio sap." Fortunately, Diamond's wine-stained voice is still full of emotion and more than capable of closing the album's gaping holes with a just-right emphasis here and a plaintive growl there. "Mountains of Love"'s sanitized world beat groove and keening horns would shrivel in anyone else's hands. But when Neil sings "Come on let's go/We've got room on that mountain of love," you want to believe in his feed-the-world message and follow him right to the top of the peak (how does he climb in those ankle boots?). A strummed acoustic guitar slows down the Hammond/Warren composition "Don't Turn Around," letting it breathe like the classic "Red Red Wine" -- Diamond's take has none of the mechanization of Ace of Base's later hit version. He has written or co-written 11 of Lovescape's 15 tracks, and it's his lilting, bruised heart duet with Kim Carnes that's the obvious standout. Elsewhere, he covers "One Hand, One Heart" from West Side Story, refueling the ballad with his typical message of unification and peace, and buoys the faint country feel of "When You Miss Your Love" with a deft vocal touch, never letting it drift into dangerous Elton John territory. Although heaping helpings of synthesizer do their worst to slow him down, Diamond does his best with Lovescape's material, and salvages a handful of memorable moments for longtime listeners or the casual fan.“ (Johnny Loftus, AMG)
Neil Diamond, vocals, acoustic guitar
Kim Carnes, vocals
Doug Rhone, guitar
Hadley Hockensmith, guitar
Andrew Gold, guitar
Dan Dugmore, pedal steel guitar
Benjamin Tench, organ
Alan Lindgren, keyboards
Tom Hensley, keyboards
Robbie Buchanan, keyboards, bass, drums
Reinie Press, bass
Lee Sklar, bass
Ron Tutt, drums
Vince Charles, drums
Kenny Aronoff, drums
King Errisson, congas
Peter Asher, tambourine
Linda Press, background vocals
Produced by Albert Hammond, Don Was, Peter Asher
Digitally remastered