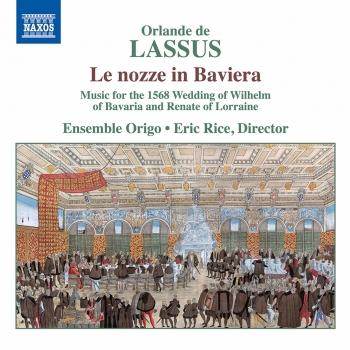 Ensemble Origo
Hailed as “a fine, flexible ensemble” by The New York Times, Ensemble Origo is an early music organization founded in 2011 and directed by Connecticut-based musicologist and conductor Eric Rice. Its aim is to present vibrant performances of early music (from the Middle Ages through the baroque) that reflect the context in which the repertory was originally produced and heard; “Origo” is Latin for “earliest beginning,” “lineage,” or “origin.” The ensemble draws on a roster of professional musicians from Connecticut, Boston, and New York. Its debut recording, released on the Naxos label in January 2021, is “Le nozze in Baviera – Orlando di Lasso’s Music for the 1568 Wedding of Wilhelm V of Bavaria and Renate of Lorraine. It includes Lasso’s moresche — settings of texts uttered in Neapolitan dialect by enslaved Africans from the Bornu Empire. Another recording still in post-production is "Martin Luther's Deutsche Messe," a reconstruction of a mass as it might have been performed in Martin Luther's orbit ca. 1530, which grew out of a concert program commemorating the 500th anniversary of the Protestant Reformation in 2017. A third recording project in post-production is “The Last Imperial Coronation – Music for the 1530 Coronation of Charles V in Bologna”; a collaboration with the Greenhouse Studios at the University of Connecticut on a multi-modal virtual reality presentation of the same event.
Eric Rice
Musicologist and conductor Eric Rice is a specialist in the history and performance of music composed before 1750. The 2019 recipient of Early Music America’s Thomas Binkley Award, he is Head of the Music Department at the University of Connecticut in Storrs, where he teaches music history, notation, and historical performance. He has published on medieval and Renaissance liturgical music and its relationship to architecture, politics, and secular music. In addition to his work with Ensemble Origo, hewas Artistic Director of the Connecticut Early Music Festival and music director and tenor in the Boston-based ensemble Exsultemus. He earned his PhD at Columbia University, where he studied with Leeman Perkins and Susan Boynton, and his AB in English and music at Bowdoin College, where he studied with William Watterson and Robert Greenlee.