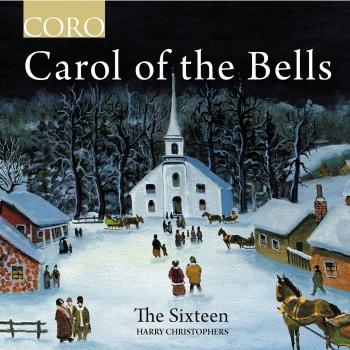 Carol of the Bells

Jeremy Budd
Born in Hertfordshire, Jeremy started out as a chorister at St Paul’s Cathedral in London before going on to study at the Royal Academy of Music. Since finishing his studies he has been much in demand on the concert platform predominantly for his Baroque repertoire. Jeremy has worked with many of the foremost conductors in this field including Sir John Eliot Gardiner, Harry Christophers, Paul McCreesh, John Butt, Bernard Labadie and Jeffrey Skidmore.
Notable performances have included a tour of Monteverdi’s Vespers of 1610 with Harry Christophers and The Sixteen, an abridged performance of Bach’s St Matthew Passion in collaboration with Streetwise Opera and The Sixteen, the Evangelist in Bach’s St Matthew Passion at Symphony Hall with Jeffrey Skidmore and Ex Cathedra, Monteverdi’s Madrigals with Jonathan Cohen and Arcangelo in Saffron Hall, Purcell’s King Arthur with Paul McCreesh and also a programme of Purcell Odes in the Wigmore Hall. Recently Jeremy has also performed Gibbons’ Verse Anthems with Fretwork and toured Bach’s Christmas Oratorio with Masaaki Suzuki and the Orchestra of the Age of Enlightenment.
Grace Davidson
is an English soprano who specialises in the performance and recording of Baroque music. She won the Early Music Prize while studying singing at the Royal Academy of Music. Since then, she has worked with leading Baroque ensembles of our day, singing under the batons of Sir John Eliot Gardner, Paul McCreesh, Philippe Herreweghe and Harry Christophers. Her discography includes a decade of CDs with The Sixteen, many of which feature her as soloist and include Handel’s Jephtha (as Angel) and Dixit Dominus, Monteverdi’s Vespers of 1610 and ‘Pianto della Madonna’ from the Selva morale e spirituale and Bach’s Lutheran Masses. She has also recorded Fauré’s Requiem with the London Symphony Orchestra on the LSO Label and her Pie Jesu was described as ‘matchless’ by Richard Morrison on BBC Radio 3’s Building a Library.
Mark Dobell
Originally from Tunbridge Wells in Kent, Mark Dobell was a choral scholar of Clare College, Cambridge, where he read Classics. He later studied as a postgraduate at the Royal Academy of Music, and was awarded the Clifton Prize for the best final recital.
Mark has worked as a soloist all over the world with renowned conductors including Harry Christophers, Sir John Eliot Gardiner, Sir Roger Norrington and Sir James MacMillan. His extensive concert and oratorio repertoire includes many of the major works of Handel, Bach and Mozart, as well as pieces by composers as varied as Monteverdi, Haydn, Mendelssohn, Britten, Jonathan Dove and Karl Jenkins.
Simon Berridge
was born in Hertfordshire and went on to pursue his music studies at Trinity College, Cambridge. He subsequently studied voice as a postgraduate at the Royal College of Music.
Simon has worked with many of the leading British ensembles including The Sixteen. He has also worked with several European ensembles including Collegium Vocale of Gent and Les Arts Florissants.
His solo performances have included Messiah with the Orchestra of the Age of Enlightenment, Monteverdi’s Vespers of 1610 at the BBC Proms and Edinburgh Festival, Bach’s Magnificat in the Queen Elizabeth Hall, Handel’s Israel in Egypt in the Covent Garden Festival with The Sixteen, Bach’s St Matthew Passion in the London Handel Festival and the St John Passion (Evangelist and arias) performed live on Spanish Radio in the National Auditorium.
Simon’s operatic roles have included ‘Sandy’ in The Lighthouse by Peter Maxwell Davies, ‘The Madwoman’ in Curlew River by Benjamin Britten, and the ‘Auctioneer’ in The Rake’s Progress.
Harry Christophers
stands among today’s great champions of choral music. In partnership with The Sixteen, the ensemble he founded almost 40 years ago, he has set benchmark standards for the performance of everything from late medieval polyphony to important new works by contemporary composers. His international influence is supported by more than 150 recordings and has been enhanced by his work as Artistic Director of Boston’s Handel and Haydn Society and as guest conductor worldwide.
The Sixteen’s soundworld, rich in tonal variety and expressive nuance, reflects Christophers’ determination to create a vibrant choral instrument from the blend of adult professional singers. Under his leadership The Sixteen has established its annual Choral Pilgrimage to cathedrals, churches and other UK venues, created the Sacred Music series for BBC television, and developed an acclaimed period-instrument orchestra. Highlights of their recent work include an Artist Residency at Wigmore Hall, a large-scale tour of Monteverdi’s Vespers of 1610, and the world premiere of Sir James MacMillan’s Stabat mater; their future projects, meanwhile, comprise a new series devoted to Purcell and an ongoing survey of Handel’s dramatic oratorios.
Harry has served as Artistic Director of the Handel and Haydn Society since 2008. He was also appointed as Principal Guest Conductor of the City of Granada Orchestra in 2008 and has worked as guest conductor with, among others, the London Symphony Orchestra, the BBC Philharmonic, the San Francisco Symphony Orchestra and the Deutsches Kammerphilharmonie. Christophers’ extensive commitment to opera has embraced productions for English National Opera and Lisbon Opera and work with the Granada, Buxton and Grange Park festivals. He was appointed a CBE in the Queen’s 2012 Birthday Honours for his services to music. He is an Honorary Fellow of Magdalen College, Oxford, as well as the Royal Welsh College of Music and Drama, and has Honorary Doctorates in Music from the Universities of Leicester, Canterbury Christ Church and Northumbria.